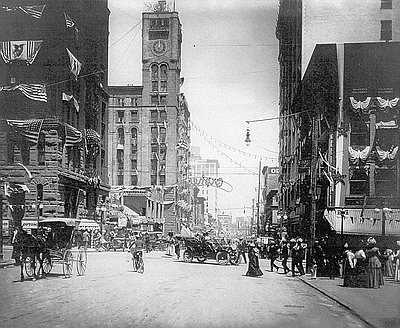 This busy corner at Southwest Sixth and Alder shows the mixed modes of transportation common in 1912 when the photo was taken.  Bicycles remained popular almost thirty years after their introduction in Portland and cars and horse-drawn carriages continued to vie for the right of way since common sense was the main traffic-rule.  Just a few streets over, streetcars and heavy pedestrian traffic added to the confusion.

Writer Laurence Pratt recalled the early twentieth-century Portland streets as full of noise and congestion.  Carriage horses and buggies clattering along at a good clip, rugged Percherons, up to six at a time, pulling heavy trucks, and the screeching wheels and clanging gongs of the streetcars all contributed to a riot of sounds.

The Oregonian Building, near the center of the photo, was built in 1892.  The main part of the building was nine stories tall and the clock tower added another three stories to the impressive structure.  The cost of the building, coupled with the cost of newly purchased printing equipment, nearly ruined the paper when the national economy went into a depression the year after it was built.