The Wreck of the Peter Iredale 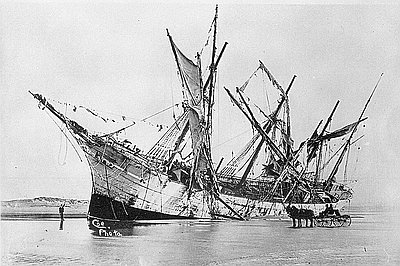 The wreck of the Peter Iredale is shown in this photograph, taken by Portland photographer Leo Simon on November 13, 1906, nineteen days after the ship ran aground near Ft. Stevens.

The Peter Iredale was a four-masted steel bark built in Maryport, England, in 1890 and owned by British shipping firm Iredale & Porter. On September 26, 1906, the Iredale left Salina Cruz, Mexico, bound for Portland, where it was to pick up a cargo of wheat for the United Kingdom. Despite encountering heavy fog, they managed to safely reach the mouth of the Columbia River early in the morning of October 25. The captain of the ship, H. Lawrence, later recalled that, as they waited for a pilot, “a heavy southeast wind blew and a strong current prevailed. Before the vessel could be veered around, she was in the breakers and all efforts to keep her off were unavailing.” The Iredale ran aground at Clatsop Beach, hitting so hard that three of her masts snapped from the impact. Fortunately, none of the crew were seriously injured. Captain Lawrence ordered that the ship be abandoned, and rockets were launched to signal for help.

The lifesaving station at Point Adams quickly responded, sending a team of men to rescue the crew. It was a dangerous task, but the lifesavers managed to bring all twenty-seven crewmen, including two stowaways, safely to shore. William K. Inman, one of the lifesavers who helped Captain Lawrence ashore, remembered that the red-bearded captain stood stiffly at attention, saluted his ship, and said “May God bless you and may your bones bleach in these sands.” He then turned and addressed his men with a bottle of whisky in his hand. “Boys,” he said, “have a drink.” The British Naval Court later ruled that the sudden wind shift and the strong current were responsible for the stranding of the ship, and that the captain and his officers were “in no wise to blame.”

The wrecked bark became an immediate tourist attraction. The day after the ship ran ashore the Oregon Journal reported that the wreck “proved a strong attraction…and in spite of the gale that was raging scores flocked to the scene of the disaster.” They noted that the Astoria & Columbia River Railroad was already planning to run excursion trains to the site.

Although the ship has been broken up by wave, wind, and sand over the years, the wreck of the Peter Iredale continues to be a popular tourist attraction.