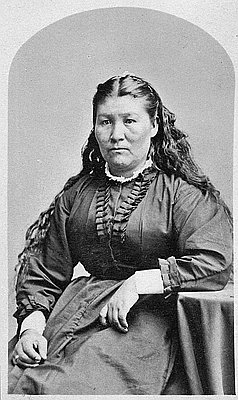 Toby Winema Riddle, also known as Kaitchkana and Nanooktowa, was born near southern Oregon's Link River around 1850. She was related to Kintpuash, better known as Captain Jack, the leader of the 1872-1873 Modoc War. Both she and her husband, a white settler by the name of Frank Riddle, acted as interpreters during this war, arranging meetings and facilitating negotiations between the Modoc and the U.S. Army.

Toby Riddle is perhaps best known for having warned General Edward Canby about the Modoc plot to kill him during peace negotiations, advice the general ignored. As interpreter, she was present at the killing of Canby and another member of the peace commission in April 1873. She was later celebrated for having saved the life of Reverend A.B. Meacham during this attack. Seeing the wounded reverend in the process of being scalped, the quick thinking interpreter yelled that the soldiers were coming, sending the Modoc warriors running.

She later served as interpreter during the war crimes trial of her cousin Kintpuash and five other Modoc warriors. After the war, she went on tour around the country with Meacham and a group of Modoc Indians involved in the conflict.

Meacham, who named her Winema, which he claimed meant “woman-chief,” later wrote an embellished account of her life. Her loyalty to the whites subsequently came to be widely admired and was rewarded with a government pension. She died in 1920 on the Klamath Reservation, where she had lived most of her life.

Further Reading:
Murray, Keith A. The Modocs and Their War. Norman, Okla., 1959.