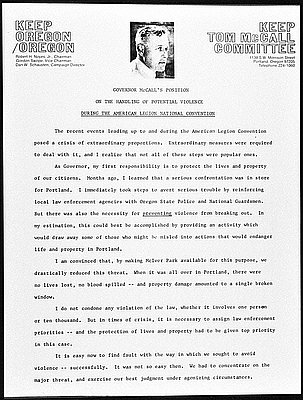 Oregon GovernorTom McCall issued this eight-page press release in early September, 1970, during his successful re-election campaign. This is the first page of that statement.  In it, McCall defended his decision to use state money and employees to organize a three-day rock music festival at McIver State Park, in Clackamas County, called Vortex I. McCall and his staff used the festival to avert a potentially violent confrontation between anti-Vietnam War protestors, police, and members of the national American Legion, a veterans’ organization. The American Legion had scheduled their national convention in Portland and invited President Richard Nixon to be the keynote speaker.

In the press release, McCall, a former journalist, also listed numerous civil riots and violent events that occurred between 1965 and 1970 in American cities, causing deaths and property damage. As a comparison, he pointed out that the protest during the American Legion convention drew few people, was mostly peaceful, and resulted in only one broken window.

Portland business owners also contributed money for Vortex I, which attracted more than 35,000 people — including many youth who were allowed to flout laws by using drugs and going naked. The idea for Vortex I was first proposed by “The Family,” a Portland-based hippie organization that helped run the festival.

While historians have determined that the threat of a riot in Portland was overestimated, McCall had reason to worry. A Portland State University protest group, called the People’s Army Jamboree, planned to demonstrate against the American Legion and President Nixon, who canceled his appearance at the last minute and sent Vice President Spiro Agnew instead. The Federal Bureau of Investigation (FBI) warned McCall that as many as 50,000 protestors were planning a riot in Portland. In the end, as few as one thousand protestors marched peacefully in Portland streets during the weekend of the convention and festival.