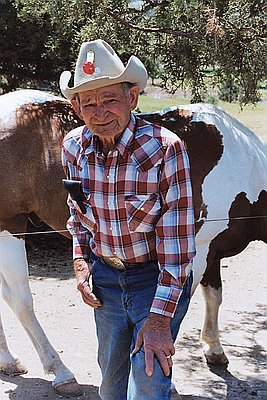 This photograph of John Sharp posing in front of his Prineville home was taken by Folklife coordinator Leila Childs on June 9, 2000.  At the time, Sharp was training Dory Howell (not pictured) how to “gentle and train” wild horses as part of the Traditional Arts Apprenticeship Program of the Oregon Historical Society Folklife Program.

John Sharp was born in 1914. He grew up on a dairy farm in Oklahoma where, by the age of nine, he learned to train horses and mules.  In 1932, he traveled to Oregon by freight train and worked as a ranch hand throughout central Oregon.  He began training wild horses in 1936, and since then has become well known for a unique technique―he calls it “fishing”―employed to gentle them.  Instead of “breaking” wild horses by forcing them to carry a saddle and rider until they stop bucking, Sharp’s technique relies primarily upon the use of a soft voice, subtle non-verbals, one or two bamboo poles 10 to 12 feet in length, and patience.

Sharp prefers to begin gentling untrained horses in a small corral, ideally about 24 x 24 feet. Using only an outstretched bamboo pole to desensitize the horses to human touch, he rubs and pats them all over their bodies―slowly moving closer as he earns their trust.  According to Sharp, “I start all of them by laying the pole at the top of the neck. That’s a soothing spot for a horse. That’s where the mama rubs the baby when he gets excited and she wants to quiet him down. Just watching horses is where I learned a lot of this. You have to be able to read a horse to do a good job.”  Once horses can handle being touched, he works with them by hand―using similar techniques employed by many other horse trainers.  Still, his unique style of gentling has earned him a reputation as a real-life “horse whisperer.”