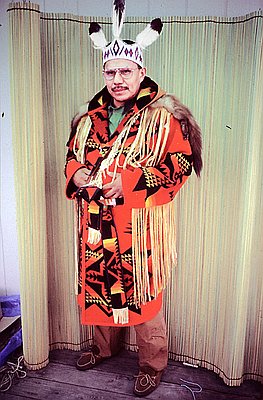 This photograph of Taw Li Winch (“tule man” in English), posing in front of a large tule mat, was taken in 1995 during his participation in the Traditional Arts Apprenticeship Program of the Oregon Historical Society Folklife Program.  Taw Li Winch (previsouly known as Larry Dick) was initiated into the Warm Springs Medicine Society at the age of fifteen and currently serves his people as an undertaker and ceremonial leader.

Born in 1955, on the Warm Springs Reservation, Taw Li Winch learned how to harvest tules and make tule mats from his grandmother, Annie Dick.  He learned the art of making deer hoof rattles from his uncle, Warm Springs Chief Nelson Wallulatum. Now, considered to be a master artist of both traditions, he has been passing on his knowledge to others in an effort to help preserve his people’s way of life.

Tules are typically harvested from along the shores of marshes, rivers, streams, ponds, and lakes in the late summer and fall when they are tall and mature. Using a sharp knife, the tule stalks are cut near the base of the plant then bundled together for easy transport.  Next, they are separated, cut into desired lengths, and stored to dry. Once dry Taw Li Winch evenly arranges the tules in a row and sews them together using a half-turn twining technique around each tule. If made correctly, a tule mat will withstand years of use.

Tule mats are used on the walls of traditional structures such as teepees and longhouses.  They are an essential part of special ceremonies such as name givings, weddings, funerals, and medicine singings.  Tule mats are also used to dry traditional foods and are employed as table mats during feasts.