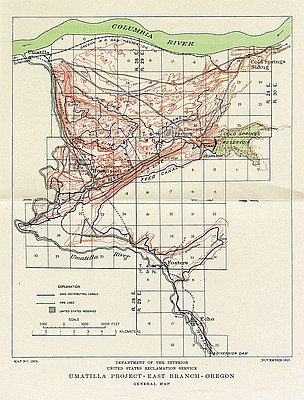 Between 1906 and 1908, the federal government built the first part of the Umatilla Irrigation Project, a large-scale development to divert water from the Umatilla River to farmers’ fields in northern Umatilla County. A 26-mile-long canal brought the water to the Cold Springs Reservoir, where a series of outlet pipes and canals carried water to crops. The project was funded by the 1902 Reclamation Act, which established a government agency to implement irrigation and hydropower projects throughout the West. The Umatilla Project gave birth to the city of Hermiston, six miles south of the Columbia River, where the project was headquartered. The Department of the Interior published this map of the project in 1910.

In 1941, the U.S. Army acquired nearly 100,000 acres of land near Hermiston, where workers built the Umatilla Ordnance Depot.  As many as 7,000 workers moved to the area to construct and work at the depot. In 1962, the army began to store chemical weapons at the depot.