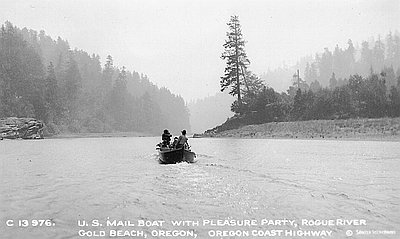 Due to the mountainous and isolated terrain of southern Oregon, early settlers used boats on the Rogue River to transport themselves and goods from the ocean port at Gold Beach to interior settlements. Gold miner and farmer Elijah Huitt Price established the first mailboat service on the river in 1895 to deliver mail to about a dozen households. Mailboat operators used an eighteen-foot, double-ended rowboat, made by local resident Henry Moore, on weekly trips to pick up and deliver mail between Illahe, about forty miles from the mouth of the Rogue River, and Gold Beach. River travelers used poles to move the boats through shallow areas and pulled their boats by rope over the more treacherous rapids. Mailboats still operate on the river today, delivering mail as far as Agness, eight miles downriver from Illahe. People began to use motorboats on the river after the turn of the century, and in the 1920s people started to take tours up the river on mailboats.

Many of the first settlers on the Rogue River were gold miners and their families who arrived in the late 1860s. Some of the women were Karok Indians from the lower Klamath River Basin who had married Euro Americans. In 1900, the Curry County population was 1,868. In 2000, it was 21,137.