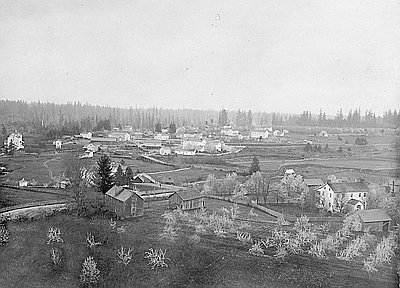 This photograph was taken in 1889, looking southeast from one of the balconies on the 114-foot tall church bell tower in Aurora, Oregon. Although the original communal colony known as Aurora was officially dissolved in 1877, many of the colony’s members continued to live and work there. Structures in the center of the photo include a sawmill, gristmill, and spinning mill. Those in the back include various workshops, retail businesses, stables, and living quarters of the colony’s craftsmen and tradesmen.

In 1853, Wilhelm Keil sent nine or ten scouts from his religious communal society of Bethel, Missouri to the Pacific Northwest with the mission of finding a suitable site for the relocation of his faithful followers. A year later, six of the scouts returned to Bethel with news of their newly discovered “second Eden” in Willapa Valley, Washington Territory. In May 1855, 175 people left Bethel under the leadership of Keil, arriving safely in Portland after an overland journey of approximately four and a half months. From there, Keil and the scouts traveled on to the Willapa Valley. Although Keil had asked his scouts to choose an isolated place, Willapa’s extreme isolation frustrated him. Not only was Willapa remote, it was a waterlogged bog for much of the year. When Keil reported to his followers, he claimed “Our clothes and shoes actually rot on our bodies because of the mud and wetness. We are imprisoned worse than prisoners in jail.”

In a move that alienated some of his scouts, Keil purchased about 500 acres of land in 1856 just south of the Willamette River in Oregon’s Marion County. He located the center of his new community, named Aurora after his daughter, in a quarter-section of land purchased from George White. Although it was a heavily wooded area, the existence of a saw mill on the site provided the young colony with the means to generate revenue for the communal treasury while also providing lumber for the construction of houses, businesses, and the colony’s church.

By 1877, the Aurora colony’s land holdings grew to approximately 8,000 acres. By then approximately 600 colonists were living in a fully-modern community with all of the trappings of the surrounding non-communal towns. When Keil died unexpectedly that same year, Aurora’s leaders dissolved the colony and redistributed the communal property among its members.