View of the Habitations in Nootka Sound 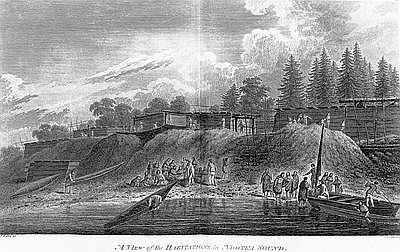 This engraving represents men from Captain James Cook’s third voyage to the Pacific Ocean meeting with Native Americans on the beach below what is probably Yuquot, the summer village of the Mowachaht branch of the Nuu-Chah-Nulth (Nootka) people. Yuquot was located on Nootka Sound, in a protected cove on the west coast of Vancouver Island. As the fur trade in the region grew, Nootka Sound became an increasingly important destination for Euro American explorers and fur traders during the last decades of the eighteenth century.

When Cook arrived at Nootka Sound on April 1, 1778, he was the first European to drop anchor in what was to become the most important port in the Pacific Northwest a decade later. Naval and merchant ships from Britain, Spain, France, Portugal, and the United States all made Nootka Sound a place to conduct business and restock their ships. Although it took almost seven years for another European ship to follow Cook’s visit to the Sound, by 1792, at the height of the region’s fur trade, Capt. George Vancouver listed the presence of 21 foreign ships in the harbor. That number included “11 British, 7 American, 2 Portuguese, and 1 French.” The meeting of cultures depicted in John Webber’s 1778 engraving was a telling portent of Nootka Sound’s future as the locus of a busy multi-national and multi-ethnic trade system.

While the fur trade played a key role in the increasing the numbers of Europeans who came to the Northwest Coast, other reasons brought them as well. Spain and Britain almost went to war over their competing territorial claims in 1789-1790, in what came to be called the “Nootka Sound Crisis.” To strengthen their respective claims in the region, British and Spanish expeditions sailed the North Pacific as much for political reasons as they did in pursuit of scientific knowledge or profit. For example, Alejandro Malaspina’s 1791 expedition to Alaska in search of the Northwest Passage provided Spain an opportunity to assess both the extent of British and Russian expansion in the Pacific Northwest and the status of its small garrison at Nootka Sound.