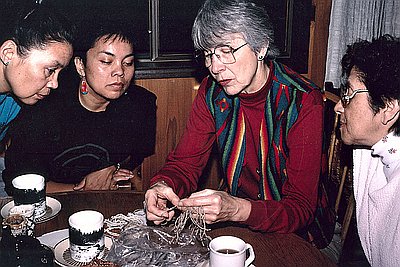 This photograph was taken by Nancy J. Nusz on February 8, 1991 to document Mary D. Schlick training apprentices (left to right) Pat Gold, Bernyce Courtney, and Arlene Boileau in the art of full-turn twining. The four women worked together through the Traditional Arts Apprenticeship Program of the Oregon Historical Society Folklife Program.

Mary Schlick became interested in the basket-making traditions of the mid-Columbia River’s Native peoples while living on the Colville, Yakama, and Warm Springs reservations with her husband, a forester with the U.S. Bureau of Indian Affairs. Although not a Native American herself, she gained the trust of several elder Indian weavers who generously shared their basket-making knowledge with her. As her weaving skills improved, under the tutelage of artists like Julia Sohappy (Yakama), Schlick became increasingly concerned that the basketry traditions of the mid-Columbia’s people were being lost.

Schlick took a special interest in reviving the art of full-turn twining, a rare weaving method mastered by basketmakers of the mid-Columbia. The last known maker of the traditional Wasco-style cylindrical baskets, Louise Van Pelt Sconawah Spino, died in 1971. Schlick first studied old baskets that had been preserved in private and museum collections, and after much trial and error, learned the basics of the full-turn twining technique.  She then fine-tuned her understanding of the weaving tradition by talking with tribal elders who had observed the baskets being made. In 1990, Schlick was awarded a grant through the Traditional Arts Apprentice Program of the Oregon Historical Society Folklife Program to teach the three women. The apprenticeships were successful and the basketmaking tradition has been effectively revived on the Warm Springs Reservation.

This Wasco Sally Bag, named “Sturgeon Greet the Babies,” was made by Pat Courtney Gold, a member of the Wasco Nation of the Confederated Tribes of the Warm Springs Reservation.  According to Gold: “There are two pregnant couples on the basket. The human images represent our Wasco ancestors. The babies …