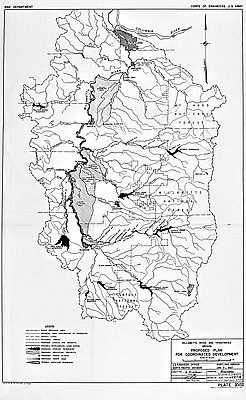 In 1938, the U.S. Army Corps of Engineers included this map, “Willamette River and Tributaries, Oregon, Proposed Plan for Coordinated Development,” in a report submitted to the Commerce Committee of the U.S. Senate. According to Louis Johnson, the Acting Secretary of War, the report was “authorized by the Flood Control Act approved June 22, 1936, by act of Congress approved June 13, 1934, and by the River and Harbor Act approved August 30, 1935.”

The first surveys of the Willamette River Valley for water resource development were carried out by the Army Corps’ Portland District between 1928 and 1931 as part of a larger series of surveys related to the Columbia River and its tributaries. Although Thomas M. Robins, the Army Corps’ Division Engineer, stated “there is no flood problem on the Willamette of sufficient magnitude to necessitate formulation of a general plan for flood control,” in a preliminary report submitted to Congress in 1932, further surveys (and lobbying by local interests) changed his mind by 1937. Subsequently, he recommended that the waters of the Willamette be developed to serve multiple purposes, including flood control, irrigation, navigation, hydropower, and stream purification. In particular, the Army Corps proposed that seven dams be constructed:  Cottage Grove (on the Coast Fork); Dorena (on the Row River); Lookout Point (on the Middle Fork); Quartz Creek (on the McKenzie River); Fern Ridge (on the Long Tom River); Sweet Home (on the South Santiam River); and Detroit (on the North Santiam River).

After reviewing Robins’ report, the Board of Army Engineers turned down the Willamette Valley Project in November 1937, claiming “the economic and financial conditions do not warrant at this time all the essential projects in this plan.” Civic and business leaders in the Willamette Valley immediately organized their efforts to have the board’s decision reversed. Robins encouraged them to be aggressively persistent in their efforts, telling them “You may have to hit ‘em over the head with a club, but those tactics in time will wear anybody down.”  Following his lead, Marshall N. Dana, journalist and soon-to-be editor of the Oregon Journal, led an effort to invite the board to the valley for a personal inspection. They accepted the invitation and in December, six members of the board were taken on a three-day tour of the valley—escorted by Robins and Robert H. Kipp, executive secretary of the Willamette Valley Project Committee.

On March 10, 1938, the Board of Engineers officially reversed its opinion on the Willamette Valley Project. They recommended that Congress provide the necessary funding—then estimated at $56 million—for the construction of the proposed seven dams, for the modernization and enlargement of the navigation locks at Oregon City (which did not occur), and for the deepening of the navigation channel (to provide a six-foot depth to Salem and a four-foot depth to Albany). Construction on the project began the following summer.

Willingham, William F. Army Engineers and the Development of Oregon: A History of the Portland District U.S. Army Corps of Engineers. Washington, D.C., 1983.