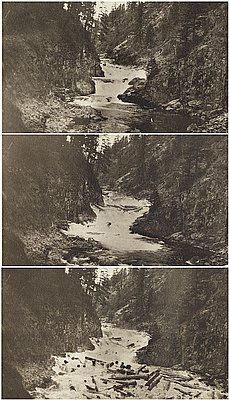 This sequence of photographs shows logs released from behind a splash dam moving through southern Washington’s Wind River. The photographs were most likely taken sometime between the early 1900s and the mid-1920s.

Today most logs are moved out of the woods on trucks, but in the nineteenth and early twentieth centuries, waterways were a major means of transporting logs from the forest to the mill. Since streamflow was insufficient in many streams to float logs, timber companies built splash dams, which created artificial ponds into which logs were dumped. The dams were then opened periodically, releasing a flood of water and logs downstream. Obstructions were often blasted out of streams to further improve the flow of logs.

While useful to industry, splash dams were destructive of fish life, particularly salmon and other migratory fish. These dams were rarely built with fish ladders, and the flood of water and logs killed fish outright, scoured their spawning beds, and eroded streambanks. The logging of riparian forests and the dynamiting of log jams and river obstructions resulted in additional impacts to fish populations.

Due to severe overstocking of the range during World War I—brought on by federal policies and soaring prices for meat, leather, and tallow and followed by a sudden decline in beef, wool, and horse prices at war’s end—the boom ultimately brought hardship to southeastern Oregon ranchers. The future of the …