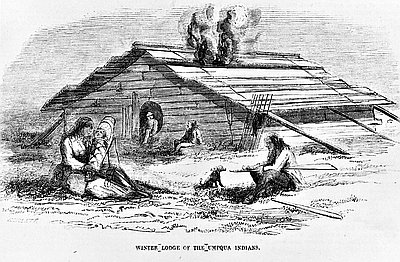 This engraving was prepared from a sketch made in 1857 by an unknown artist. It appeared in Frank Leslie’s Illustrated Newspaper, April 24, 1858, accompanying an article titled, “Scenes and Incidents of Oregon Territory.”

The lodge that is pictured represents a typical lodging among the Lower Umpqua Indians, who spoke a dialect of the Siuslawan tongue. They lived in winter villages along the lower reaches of the Umpqua River and Smith River, Tahkenitch Lake, and Winchester Bay, with seasonal camps farther inland.

The winter villages included houses built of cedar planks, from 20 to 50 or more feet in length and ten to 25 feet in width. A house was built over an excavation of from three to six feet in depth. Two or more center posts supported a ridgepole, and rafter poles extended down either to the ground—as shown in this illustration—or to side supports. The planks were held on by lashing, and the boards near the top could be moved to allow smoke to escape from the interior fire pits. Entry was through a rounded doorway at one of the gable ends.

The interior of the lodge was lined with tule mats, and mats or hides covered the floor. Mats were used to partition the lodge into separate living areas for several families. Wooden platforms or tule mats were used for beds. Food storage and preparation took place in the lodge, and meat and fish might be smoked above the lodge fire pits.

Lodges in summer camps were temporary, often huts made of thatched grass. Similar structures could often be found in the winter villages, used for work areas or extra sleeping quarters. Sweat houses were of two kinds. One was a small earth-covered hut used by both men and women specifically for ritual and recreational sweating. Another sweat house was similar in structure to the family lodge, but square, with a deep excavation and with the boards covered with earth. This lodge was specifically for men and adolescent boys.

Despite wide differences in tribal customs and language, family lodges of similar design and materials were used by Indians along the entire Oregon Coast and in the western river valleys: Chinook, Kalapuyan, Tillamook, Alsean, Siuslawan, Coosan, and the various Athapaskans of the southwestern corner.

Further Reading:
Beckham, Stephen Dow with Christina Romano. The Indians of Western Oregon: This Land Was Theirs. Coos Bay, Oreg., 1977.