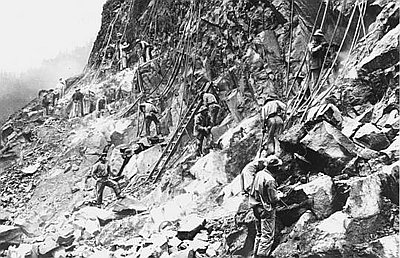 This 1935 photograph shows workers excavating volcanic rock at the construction site of Bonneville Dam on the Columbia River. Workers used jackhammers and explosives to remove rock in preparation for a spillway dam, a powerhouse, and navigation locks. Between 1934 and 1937, roughly three thousand workers labored day and night in successive eight-hour shifts to build the dam.

The federal government funded the project through the Public Works Administration (PWA), one of President Franklin D. Roosevelt’s New Deal programs that provided jobs for the unemployed during the Depression. Bonneville was the first of fourteen large dams built on the main stem of the Columbia River.

Workers cleared water from the site by sinking huge wooden cofferdams filled with earth and rock into the river, blocking half of its flow. They then pumped out water from the blocked off area and excavated down to the bedrock. It was dangerous work and one man was killed during the construction.

In 1937, the U.S. Army Corps of Engineers (USACE) completed construction of Bonneville Dam, located forty-two miles east of Portland on the Columbia River. The dam’s turbines, connected to electrical generators, create electricity when water is diverted through gates that cause the turbine to spin. During construction, the USACE employed …