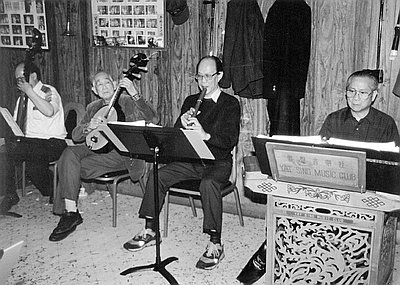 This photograph of the Yat Sing Music Club was taken by Nancy Nusz in 1994. The music club has been performing Cantonese opera in Portland since World War II. During the 1990s, several artists from the club participated in the Traditional Arts Apprenticeship Program of the Oregon Historical Society Folklife Program. The Yat Sing Music Club is a Chinese music group that meets to rehearse Cantonese opera in Portland’s Old Town/Chinatown on a weekly basis.

The Yat Sing Music Club was founded in 1941 by Chinese immigrants who used their musical talents to raise money for China’s defense against the Japanese. After the war, the group continued to meet and many of its original members still play with the group. During that time, “we musicians in the club have learned from and taught each other to perfect our skills,” says musician John Chan of Portland. Today, the club is regularly called upon by the Chinese community to perform at social functions like weddings and dedications.

Although the origin of Chinese opera has been dated to 1100 B.C.E., Cantonese opera, known for its softer tones and melodies, only dates to the sixteenth century. Traditionally, Chinese opera musicians, including Cantonese opera musicians, are trained in a full spectrum of skills. According to Chan, “as a master musician in our Chinese tradition, one must have excellent skills in all aspects of the opera music, including music theory, use of instruments, and singing skills.”

This photograph was taken to document Jean Qin Ye’s (left) instruction of Rosalind Wang (right) in Gong Bi, a traditional Chinese painting style.  The two artists worked together in 1995 through the Traditional Arts Apprenticeship Program of the Oregon Historical Society Folklife Program.

Jean Qin Ye was born into a …