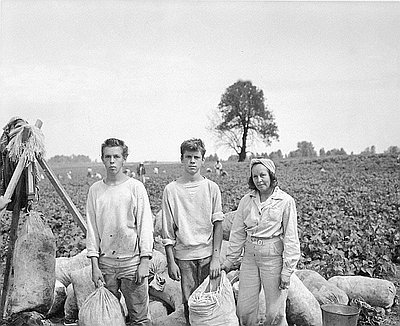 This 1943 photograph shows two teenage boys working with a woman to harvest wax bush beans on Sauvie Island. During World War II, many Oregon teenagers and women supported the war effort by working as seasonal laborers on area farms. They responded to a nation-wide labor shortage brought on by increased wartime production. Many people who had been working as farm laborers moved into higher paying jobs in the national defense industry, building ships and planes.

Between 1943 and 1947, the Oregon State Emergency Farm Labor Service placed thousands of youth and women on Oregon farms, where they thinned and harvested crops. Some of the children and teenagers were members of the Victory Farm Volunteers, a national organization for youth between the ages of 11 and 17. Members of the Women’s Land Army, an government organization that encouraged women to work as farm laborers, often supervised the children.

While the wartime effort from women and children was considerable, it did not relieve the labor crisis. National and state programs also placed Mexican nationals, Japanese internees, German prisoners-of-war, and conscientious objectors on Oregon farms.