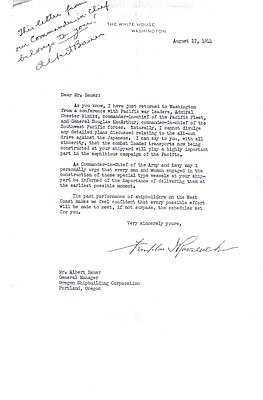 This letter, signed by Pres. Franklin Roosevelt and addressed to Albert Bauer, was found in the Oregon Shipbuilding Corporation photographic collection in the S.S. Nehalem album folder. The Nehalem was the first ship of the year completed by the Swan Island shipyards in 1944, and it was launched by an (almost) all-women crew.

In the letter, Roosevelt congratulates the Oregon Shipbuilding Corporation for its aggressive production schedule, and refers to war efforts in the Pacific, where the majority of the ships built in Oregon were put to use. Albert Bauer was the general manager for OSC, and he probably passed the letter on to his employees to thank them and to keep morale and production levels high. It is unclear who he is addressing in his handwritten note, but it is likely to a generalized "you"--that is, all the employees of OSC. Because the letter was found with the Nehalem photos, it is also possible that he was directing his acknowledgements specifically to the women working for the company because of their indispensible labor contribution during a time when federal government contracts were pushing shipbuilding companies to their limits.

Each ship built and launched from the Oregon shipyards during World War II was assigned a sponsor, who attended the launching ceremony and christened the ship by breaking a bottle of champagne on the bow. This good-luck ceremony is thousands of years old in some countries, and the United States …