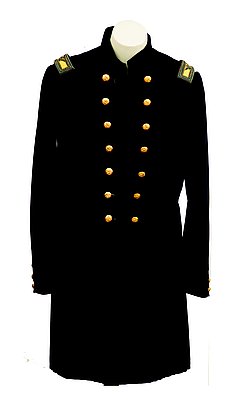 This uniform, belonging to Col. Thomas R. Cornelius of Company “D,” First Regiment in the Oregon Cavalry Volunteers, is representative of those worn by soldiers in the Union Army during the Civil War. Although the regular army units were sent east when the war started, the federal government maintained volunteer soldiers in Oregon—not only to defend the important Pacific ports against possible Confederate attacks (including from mercenary ships called Commerce Raiders which went after whalers and supply ships), but to maintain the efficient resettlement of the Northwest region by white emigrants and to secure the region’s resources. Although the Civil War battles between the Union and Confederate armies reached as far west as Arizona (Battle of Picacho Pass, 1862), the federal government extended its Union army to the West in order to subdue an entirely different "enemy": Native Americans.

The United States had concerned itself with the control and land dispossession of Native populations long before the recruitment of volunteer armies began in 1861. Fort Vancouver, originally a British trading post, was occupied by American soldiers (beginning in 1849) who helped build infrastructure and provided safe passage for travelers on the Oregon Trail. Several forts around Oregon and the region had been built for this purpose, among them Fort Yamhill, Fort Hoskins, and Fort Umpqua. When the regular army units posted there left for war in the East, the War Department repopulated the barracks with volunteers from California. More forts were built (including Camp Watson and Fort Klamath), and eventually the First Oregon Volunteer Cavalry Regiment (1861) and the First Oregon Volunteer Infantry Regiment (1864) were created.

President Lincoln made clear in his papers that the rapid settlement and control of the West were important parts of his war strategy. The West was rich with resources—including very valuable gold and silver mines—and Lincoln used legislation such as the Homestead Act and transcontinental railroads to encourage westward migration (and Union loyalty) in order to increase his reach across the country. Native groups who interfered with that plan were intimidated, subdued, and relocated.

Although the first few years of the 1860s were relatively quiet between soldiers and Native Americans, the kind of brutal, mass violence against Indians that was taking place around the country eventually came to Oregon in 1864. The Snake War (1864-1868) involved the Northern Paiute, Western Shoshone, and Bannock Indians against the U.S. army. The war is considered one of the deadliest Indian wars in the West—almost 2000 people were killed by its end. Following the end of the Civil War, the army regarrisoned regular army soldiers to take over for the volunteer units, transferring their attention from the seceding Confederates to the Native populations fighting to save their ancestral lands.

Barth, Gunter. All Quiet on the Yamhill: the Civil War in Oregon. Eugene: University of Oregon Press, 1959.