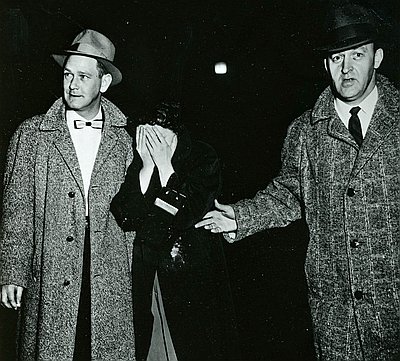 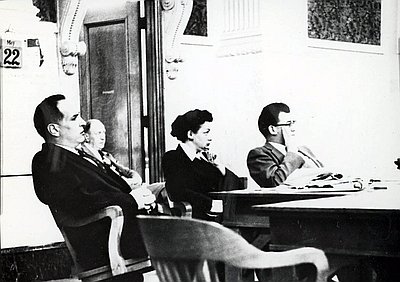 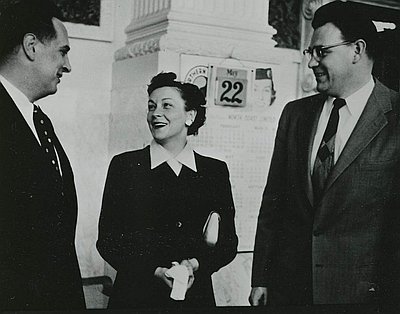 Shoppers stumbled out in shock after twelve sticks of dynamite exploded in the third floor restroom of the Meier & Frank Department Store in downtown Portland on April 15, 1955. When newspapers reported the bomb was part of a $50,000 extortion plot threatening another bomb the next day, Portland became the focus of nationwide attention, and copycat threats led to the arrest of six others in the days after the attack. Witnesses reported a man and a woman near the bathroom shortly before the blast, and when U.S. Postal Inspectors found similarities between a fraud investigation they were conducting and the extortion note, they directed Portland police detectives to William C. Peddicord. Once in police custody, Peddicord quickly confessed and fingered Joyce Keller, his wife’s younger sister, as being his “eyes” who helped him type the note and plant the bomb.

Peddicord, a thirty-eight-year-old chemist, had been blinded since nineteen by a chemical explosion from a refrigerator accident and then enjoyed brief celebrity for his climbing exploits and for hitchhiking to New York where a wealthy businessman paid for experimental, but ultimately unsuccessful, eye surgery. But by 1955, he was still living in cheap temporary war-housing on N. Kimball St. in Portland and had been forced by bankruptcy to close his laboratory ten days before the bombing. Keller, his alleged co-conspirator, was a divorced mother of three children, all of whom were in foster care at the time of the blast. She was arrested, the newspapers reported, after police detectives “traced her from one bar to another.”

Peddicord confessed to the bombing and his attorney argued for mitigating psychiatric circumstances, but Keller steadfastly maintained her innocence. At Peddicord’s trial, Judge Alfred  P. Dobson ignored his attorney’s pleas and gave him a maximum sentence of twenty years in state prison. During Keller’s trial, Peddicord—who was to be the state’s star witness against her—tried to commit suicide and then refused to testify against his sister-in-law. The state’s case against Keller began to unravel from there. Portland police detectives testified as character witnesses to her defense; the man she was living with testified she had been watching television with him at the time of the blast; and her estranged husband, Clifford Keller, appeared unexpectedly, claiming, “I’m convinced she couldn’t have done this thing.” The court agreed, and in May 1956 found Keller innocent. Peddicord served ten years for the bombing and mail fraud before the State of Oregon paroled him in 1966. After her acquittal, Joyce Keller went on to live a peaceful life working at the Nabisco plant in north Portland and volunteering for animal rescue.

The three Oregon Journal photos show here are of Keller’s arrest in 1955; her trial in 1956 where she was charged with planning a bombing and extortion plot against Aaron Frank; and of her with her lawyers, Frank Pozzi and Berkeley Lent, after she was acquitted in May 1956.

Sullivan, Ann, “Peddicord in Contempt for Refusal to Testify.” Oregonian, May 16, 1956.

The son of Aaron Meier, a founder of the Meier & Frank department store chain, Julius Meier was born in 1874. After graduating from the University of Oregon Law School in 1895, Meier spent four years practicing law before joining the family business. He became store manager and vice president …