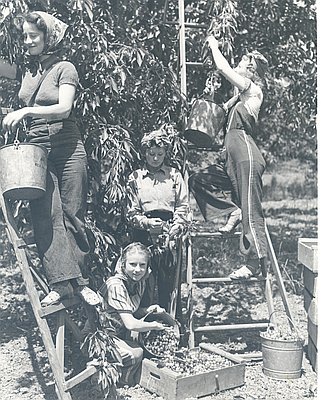 For farmers and orchardists in Oregon, labor shortages during World War II threatened to leave vegetables and grains rotting in the fields and unpicked fruit on the trees. Many men were drafted into the armed forces, and workers who traditionally traveled from farm to farm during harvesting seasons were settling in the cities to work in wartime industries.

The federal government recognized the crisis and helped by creating several labor organizations to recruit people into the farms and fields. Women and children were targeted, and they signed up by the tens of thousands. Some women joined the Women's Land Army, administered in Oregon by the OSC (now Oregon State University) Extension Service; others volunteered as part of the Victory Food Program.

These young women were likely using their school break to help pick cherries at an orchard west of Salem. Portland Public Schools, among other Oregon school districts, organized "platoons" of student workers. The Oregonian reported in the summer of 1943 that seventy-five platoons, with about thirty pickers in each platoon, were working in the fields around Portland. Without their labor, Oregon's farmers would not have met the wartime production quotas set by the state and federal governments.

In order to address the food needs of both a massive army and the over 130 million people living in the United States during World War II, Congress established emergency farm labor programs. Various federal departments, including the Department of Agriculture and the Department of Labor, organized aggressive labor recruiting programs--in …