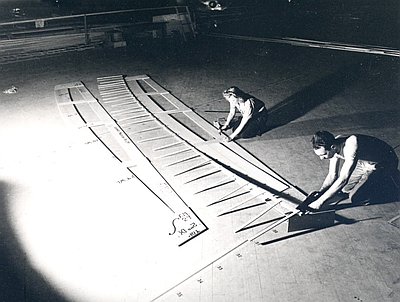 This photograph comes from the Oregon Shipbuilding Corporation collection; it was likely part of the company's series of publicity photos it used in its various publications and news releases. In the photo, a man and a woman use templates to build patterns of various ship parts.

Shipbuilding companies during World War II standardized their production by using templates like these to mass produce ship parts. Workers would trace the pattern to various materials, such as wood or steel, cut the pieces out, and hand them over to other workers to put them together, much like a three-dimensional puzzle. The man and woman here probably made hundreds of this same ship part over and over. They had to be precise in their measurements and cuts so that the ships would fit together properly. If the shipwrights had all the right pieces with the correct dimensions, they could assemble the ship quickly and efficiently. This assembly-line approach allowed shipping companies in Oregon to build hundreds of ships in a short amount of time--the Oregon Shipbuilding Corp. alone built over a thousand ships between 1941 and 1945.

Shipping companies became dependent on women workers during World War II, and while most women were hired as welders, many worked in other vital capacities--including as pattern-makers in the mold loft of the Oregon Shipbuilding Corp.