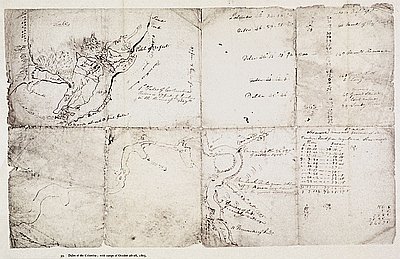 This roughly sketched map labeled Dalles of the Columbia, with camps of October 26-28, 1805, depicts the area from Celilo Falls downstream to the Klickitat River. It was drawn by William Clark in late 1805 and reproduced in Reuben Gold Thwaites’s 1905 edition of the Lewis and Clark journals, from which this copy has been taken. This area was the largest Native trading center in the Pacific Northwest for several millennia prior to white settlement. Thousands of Native people from all over the region gathered every summer to trade, fish, and socialize at what Lewis and Clark called the “Great Mart of all this Country.” The area was also home to a dense population of Wasco, Wishram, and Tenino Indians, some of whose villages are mapped here.

In the upper left hand corner of the map is a detail of Celilo Falls. Clark charts the complex system of channels and islands in the area, the portage routes, and the Native settlements near the falls. A label on the south bank reads “flees without number,” referring to the great quantity of fleas which plagued the Corps of Discovery as they portaged around the falls.

Clark has scrawled various notations pertaining to the latitude, longitude, and distances traveled on the right hand side of the document. At the bottom is a map of the area around the present-day City of The Dalles. Clark wrote on the map that the Corps of Discovery spent October 26 and 27 camped at the mouth of “Que-Nett” Creek, today called Mill Creek, though the journals say the Corps also spent October 25 there. Only one other campsite is labeled, the October 28 site between present-day The Dalles and Rowena. Further downriver Clark has mapped several Indian communities, including what Lewis and Clark called the “friendly village” just upstream of the mouth of the Klickitat River.

Clark was the first to map The Dalles-Celilo area, and the members of the Corps of Discovery are usually credited with being the first white men to see Celilo Falls, though the Lewis and Clark journals have several vague references to white traders who may have preceeded them.