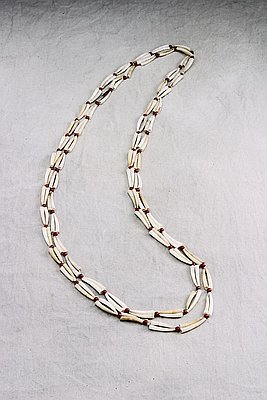 This necklace is strung with dentalia shells and beads. Dentalium (Antalis pretiosum) are variously sized ocean mollusks that resemble miniature elephant tusks and may grow up to several inches in length.  They first appear in the archaeological record of  Pacific Northwest coastal communities around 4400 B.C.E., but in small numbers.  After 1800 B.C.E., dentalium become more commonly found—particularly among the graves of high status individuals.  Archaeologists credit their increased appearance during that time to a corresponding intensification of Native economies—directly related to the stabilization of ocean levels following the end of the Pleistocene ice age.  As more complex trade relations developed along the Northwest Coast, dentalium—also known as hiixwa or haqua—became a highly prized mark of wealth and status, typically displayed as ornaments in clothing and headdresses, used as jewely, and even used in some places as a type of currency.

Most dentalium entering the indigenous trade network of the Pacific Northwest originated off the coast of Vancouver Island.  Chicklisaht, Kyuquot, and Ehattesaht communities of the Northern Nuu-chah-nulth, inhabitants of the west coast of the island, were the primary source of the shells.  However, the Kwakwaka’wakw of Quatsino Sound and Cape Scott, on the eastern coast, were also large producers.  Harvesters would work from their ocean-going canoes, extending specially-constructed long poles to the dentalium beds on the ocean floor.  At the end of the long poles were large brushes that were pushed into the mollusk beds, ensnaring dentalium in the process.

Those dentalium destined for the Columbia River trade network found their way south through the hands of the Makah, inhabiting the northwest region of the Olympic Peninsula, and then further south to the Chinookans on the lower Columbia River.  Chinookan traders, in turn, bartered with Sahaptin-speaking peoples from the Interior, and Kalapuyans of the Willamette River Valley.  Each summer, dentalium were also traded at The Dalles/Celilo trade-mart, the largest in the Pacific Northwest.  From there, dentalium made their way east as far as the Great Plains.

Further Reading:
McMillan, Alan D. Since the Time of the Transformers: The Ancient Heritage of the Nuu-chah-nulth, Ditidaht, and Makah. Vancouver, BC, 1999.

This Barnett musket, made in England, is typical of the guns made available for trade by fur trading companies in northern North America during the early and mid-nineteenth century, most notably by the Northwest Fur Company and, after 1821, by the Hudson’s Bay Company.  However, the American Fur Company, the …

As the eighteenth century came to a close, people on the Oregon Coast not only regularly traded with nearby villages but they also had occasion to trade with voyagers in seagoing canoes from the north. For centuries, people had traveled to upriver fishing places and to berrying grounds in the …