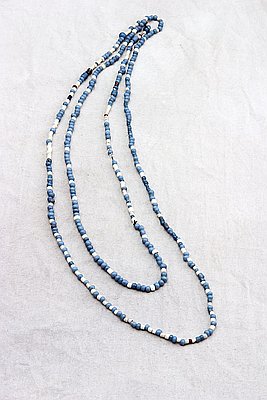 These trade beads are representative of the glass beads traded between Euro-American fur traders and Native Americans throughout much of northern North America.  They were found by archaeologists in the Rogue River Valley in southeastern Oregon.

Glass beads, produced primarily in Italy, Bohemia (modern-day Czech Republic), and China, were a highly-valued commodity for trade in Native North America.  For many Indian peoples, the ownership and display of beads was a mark of status, making them a popular trade good across the continent.  However, in northern North America, blue beads were particularly sought after, largely as a consequence of the difficulty in producing blue beads from naturally-available resources.  Without indigo or turquoise in the Pacific Northwest, Native Americans desirous of blue beads, prior to the introduction of glass beads, were restricted to the use of Monterey shells traded north from the California Coast or the rare availability of blue beads from the far-flung reaches of native trade networks.

Euro-American fur traders reveled in the high prices obtained by their stocks of relatively inexpensive, mass-produced jewelry among the Indians of the Northwest.  Indian traders, in turn, favored the glass beads for their own trading enterprises.  Compared to many other trading commodities, beads were fairly difficult to break, weren’t ruined by water or prolonged exposure to moisture, were compact and lightweight, and were eagerly traded throughout the region.  At times, beads could even be used to broker passage through hostile territories or to settle conflicts by providing compensation to injured or insulted parties.

This necklace is strung with dentalia shells and beads. Dentalium (Antalis pretiosum) are variously sized ocean mollusks that resemble miniature elephant tusks and may grow up to several inches in length.  They first appear in the archaeological record of  Pacific Northwest coastal communities around 4400 B.C.E., but in small …