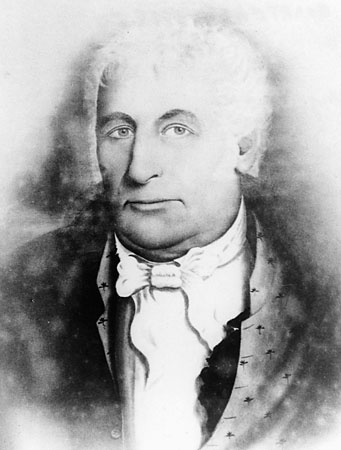 On June 4, 1808, explorer Simon Fraser wrote of his day on the Fraser River in present day British Columbia:

We experienced great danger; one of the canoes was sucked into a whirlpool whose force twisted off the stern; but this happening near the bank and the end of the rapid, the men were saved, while the canoe was dragged on shore full of water.

The day was not a particularly bad one for Fraser. Traveling the dangerous Fraser River during the spring freshet, Fraser and his crew had numerous close calls. Despite the bad conditions, Fraser descended the river, leading the third expedition to cross the continent north of Mexico.

Fraser was born in Vermont in 1776 to a family that supported Britain in the American Revolution. Fraser’s father fought on the British side until he died in an American prison in 1779. Facing persecution after the war for their support of Britain, Fraser’s family fled to Canada in 1784. They settled in Cornwall, Ontario, on the St. Lawrence River. Around 1790, Fraser went to live with his uncle, a judge in Montreal. After two years of formal education, Fraser became an apprentice clerk with the fur trading North West Company in 1792. In 1801, at the age of 25, he became a partner in the company.

Four years later, Fraser led a party across the Rocky Mountains, following parts of the Peace and Parsnip rivers that Alexander McKenzie had explored in 1793. In 1805 Fraser established Fort Trout—later called Fort McLeod—near the Crooked River in what is now British Columbia. In 1806 Fraser built two more forts, one on Stuart Lake and another on Fraser Lake. In 1807 he built Fort Georgia at the confluence of the Fraser and Nechako rivers. After receiving supplies and more men in 1807, Fraser began to solidify plans to explore a route to the Pacific. He hoped to establish an easy supply route to his new forts in order to avoid the expensive necessity of supplying them overland from the East Coast.

Fraser embarked on the river that bears his name in late May 1808, with a crew of twenty-three. He traveled by water as far as Leon Creek, then stashed his canoes and continued by land. Along the way, Indians helped Fraser with provisions and guidance. On July second, after 36 days and 520 miles of travel, Fraser sighted the Strait of Georgia. He was unable to reach the Pacific Ocean, as he precipitated bad relations with local Indians by stealing a canoe and was forced to turn back. After calculating his latitude, Fraser was disappointed to learn he had descended not the Columbia, as he had intended, but the Fraser River, several hundred miles to the north. Fraser completed the return trip in 37 days.

In 1815, in the midst of conflict between the North West Company and the Hudson’s Bay Company, Fraser attempted to retire from fur trading. Convinced to work another year, he returned west and was arrested, along with other North West Company partners, after a group of North West Company traders attacked and killed settlers at the Hudson’s Bay Company’s Red River settlement. After he and other partners were acquitted of the murders in 1818, Fraser returned to his home in Ontario. There he married Catherine MacDonell in 1820. The two had nine children. Fraser suffered a fall while serving in the militia in 1838 and lived on disability payments until he died in 1862.

This beaver trap, from the early nineteenth century, was found by William Deveny in the Rogue River of southern Oregon.

From the mid-sixteenth century through the mid-nineteenth century, consumer demand for hats made from the fur of beaver fueled far-flung efforts to hunt and trap beaver across Europe and the …