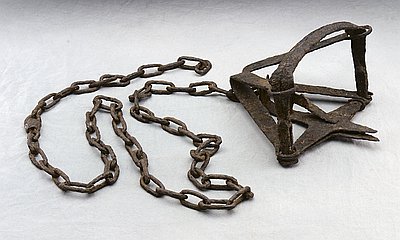 This beaver trap, from the early nineteenth century, was found by William Deveny in the Rogue River of southern Oregon.

From the mid-sixteenth century through the mid-nineteenth century, consumer demand for hats made from the fur of beaver fueled far-flung efforts to hunt and trap beaver across Europe and the Americas. Prices were sustained at such high levels throughout the period of the beaver hat’s popularity that beaver pelts were themselves referred to as “soft gold” by some.

Although many scholars of the fur trade era have romanticized the lives of free-roaming trappers, the actual act of trapping beaver was arduous and sometimes dangerous work.  To obtain quality pelts, most trapping was carried out during winter months, when the animals’ fur grew thickest.  Trappers had to frequently wade thigh-deep into frigid water near beaver dams.  They set their traps under water, anchoring the trap’s short chain in place with a stake long enough to be seen above the water line.  For bait, trappers used castoreum oil, taken from the musk glands of beaver already unlucky enough to lose their hides.

The musk oil of the beaver, used by the nocturnal rodents to attract each other for mating proved itself to be an effectively lethal attractant when rubbed onto the top of the anchoring stake or suspended from a tree branch in a small bag above the trap.  At night, an unsuspecting beaver would swim toward the scent, stand up to get a good whiff, and step on the trap’s trigger, located at the center of the trap.  Once the trigger was activated, the jaws of the trap would slam shut onto the beavers leg.  Frightened and in pain, the beavers would swim toward the deepest water available—a flight response that evolved over millenia to help them escape dangers originating from land.  However, once in deep water, with an anchor firmly attached to its foot, the trapped beaver would eventually tire and drown. Trappers preferred drowning beaver so that their catch would be preserved from scavengers as long as needed, under water, until they could empty their trap. Most often, trappers would “clean” their trap and reset it until they had caught all of the beaver in the area, then move on, leaving nothing for their competitors to capitalize.