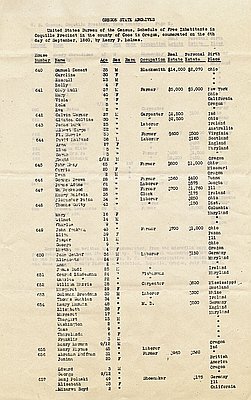 This document is a typewritten transcript of the 1860 Schedule of Free Inhabitants in Coos County’s Coquille Precinct. It was transcribed from a microfilm copy at the Oregon State Library.

The records of the United States census are an important resource for historians and other scholars interested in exploring America’s past. Census data represent a snapshot in time, revealing the nation’s demographic and economic structure in great detail and at a relatively high spatial resolution. The excerpt from the 1860 census reproduced here, for example, contains a wealth of information about the residents of Coos County’s Coquille Precinct, including their name, age, sex, race, occupation, net worth, birthplace, and family structure.

All of the ninety-eight people listed in this census were white; Indians were generally counted in a separate census, and there were apparently no Blacks or Asians living in the area at this time. The median age of the adult men was thirty-four; the adult women were slightly younger on average, with a median age of twenty-nine. Nearly 40 percent of the residents were children under the age of eighteen.

As was typical for early frontier communities, there was an obvious imbalance between men and women, with nearly three men for every woman. Most of the single men lived with other single men, though some lived alone. All women over the age of eighteen were married. All but one of the married couples had minor children living with them. The mean number of children for married couples was 2.5.

Of the forty-four men whose occupations are listed, most were laborers (46 percent), farmers (23 percent), or carpenters (11 percent). There were also two shoemakers, two fishermen, a blacksmith, a clerk, a tanner, an engineer, and a physician. Nearly 29 percent of the Coquille Precinct’s residents were foreign-born, most from Germany (64 percent) and the British Isles (29 percent). Of the American-born residents, most were born in Maryland (30 percent), Oregon (20 percent), or Ohio (17 percent). All but one of the Oregon-born residents was under the age of six.

The large number of Marylanders reflects the migration of the Baltimore Colony to the Coquille Valley in 1859. Henry Hermann, a German-born physician, was the leader of this group. He is listed in this census as “Henry Hurman.” The Hermanns had the largest family in the Coquille Precinct with eight children, though their oldest son Binger is not listed.

A moving community of loggers is depicted in this 1930 photograph. From the 1890s through World War II, major logging operations in Oregon were railroad-based, with trackage extending for many miles from tidewater or a mill into public or private forest lands. While millworkers usually lived in rooming houses, boarding …