A Night in Chinatown 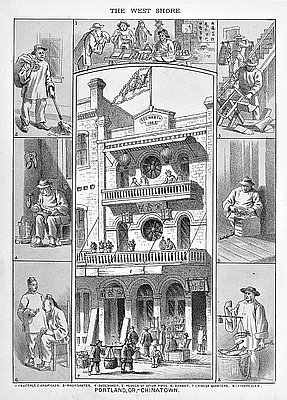 The October 1886 issue of West Shore magazine, based in Portland, featured this lithograph and an article under the title A Night in Chinatown.

By the 1880s, Chinese immigrants had been living in Oregon for more than thirty years. At the time, the state’s Chinese population was roughly 9,500, with more than half of the immigrants living in Portland. Despite the Chinese Exclusion Act of 1882, which banned immigration by Chinese laborers, Portland’s Chinatown was a thriving neighborhood. The article which accompanied this lithograph recounts the visit of the magazine staff to Chinatown, who were escorted by two city police officers familiar with area. While the article reflects the racial bias of the Euro-American staff, it also offers readers a view of the society and culture of Portland’s Chinese immigrants. The community featured various legal and illegal businesses, boarding houses, residences of prominent Chinese merchants, restaurants, saloons, pawn shops, a Chinese lottery office, and a traditional Chinese theater. The West Shore staff writer noted the courteous and friendly manner of the proprietors of the various establishments visited by the group.

In the nineteenth century, most educated Americans held views of the Chinese immigrants that were similar to those of the West Shore staff. They saw Chinese residents as a wholly alien people who would not assimilate into American society. Americans were particularly distressed that the immigrants apparently preferred to create institutions and businesses that reflected Chinese cultural values rather than adjust to the culture of their adopted land. However, this view conveniently overlooked the fact that Euro Americans actively sought to keep Chinese immigrants apart from mainstream society by placing legal and social restrictions that forced them to congregate in places such as Portland’s Chinatown. The lithograph featured here reflects the ambivalent attitude of educated Americans towards Chinese immigrants. While educated citizens valued the entrepreneurial spirit and hard work of the Chinese, they continued to view them as a class apart from European immigrants to the United States. European immigrants shared some common cultural traditions with Anglo-Americans. However, Chinese immigrants were seen as distinctive from Euro Americans because of their religious and community traditions, language, dress, and appearance.

This photograph shows a group of unidentified men standing over confiscated gambling equipment following a July 25, 1922, raid on an illegal gambling establishment in Portland’s Chinatown. Portland law enforcement officials conducted a series of raids that year in response to renewed violence by Chinese gangs.