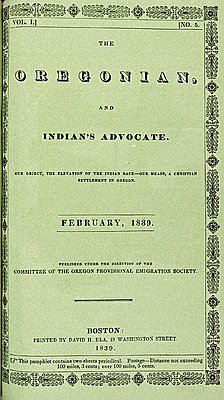 This document is an excerpt from an 1839 article that appeared in The Oregonian and Indian’s Advocate, a short-lived journal published by the Boston-based Oregon Provisional Emigration Society. In this piece an author identified only as “W” argues that California and the Oregon Country were destined to become an independent republic.

Prior to 1846, there was a great deal of debate in the United States, Great Britain, and Russia over which nation would lay permanent claim to the Oregon Country, roughly defined as the area south of Alaska, north of California, and west of the Rocky Mountains. The author begins the excerpt reproduced above by placing this debate in its geopolitical context. After dismissing the possibility that either Great Britain or Russia would gain permanent hold of Oregon, the author argues that either “Oregon will fall into the limits of the United States, or an independent transmontane nation will be raised up.” He concludes that the latter was more likely, as the Rocky Mountains were a natural barrier to the expansion of the United States. “Nature herself,” he writes, “has marked out Western America for the home of an independent nation.” This form of geographic determinism was common in the early nineteenth century. Even Thomas Jefferson believed that the Pacific slope of North America would be the home of a “great, free and independent empire,” populated by American settlers but separate from the United States.

Although “W” emphasized that he was not advocating a Pacific Republic, only predicting what he thought was most likely to happen, some Oregon settlers did actively support the establishment of an independent nation on the Pacific Coast. The settlers of the Willamette Valley held a series of meetings in 1843, two of which (known as the “Wolf Meetings”) have sometimes been considered the “point of conception” of Oregon’s political history. At one of these meetings, held early in 1843, a majority of those present voted in favor of establishing an independent republic, free from either British or American jurisdiction. In response to this worrying development, George Abernethy, an American employee of the Methodist mission, submitted a resolution that called for a four-year postponement of independence. The settlers agreed to the resolution, buying the United States time to extend its jurisdiction over the growing Willamette settlement.

Three years later the United States and Great Britain agreed to separate their claims at the Forty-ninth Parallel. Oregon soon became a U.S. territory, while the northern portion of the former Oregon Country became part of the British Empire.

Further Reading:
Hull, Dorothy. “The Movement in Oregon for the Establishment of a Pacific Coast Republic,” Oregon Historical Quarterly 17, 1916: 177-200.

On May 2, 1843, Willamette Valley settlers met at Champoeg to vote on the formation of a provisional government. The minutes recorded by George Le Breton recount the vote in favor of the provisional government (which historians later estimated to be 52-50) and the subsequent appointments of settlers to fill the …