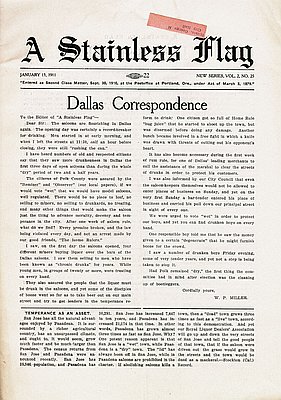 This 1911 issue of A Stainless Flag included a letter about the re-legalization of alcohol in Dallas, located west of Salem in Polk County. A Stainless Flag was a weekly magazine published by the Oregon Anti-Saloon League between 1909 and 1911,

Dallas had been “dry” since 1908, when Polk County voters chose to outlaw the sale and use of alcohol. In 1904, Oregon voters passed a statewide initiative that gave each county the option to prohibit alcohol. Almost two thirds of Oregon’s counties went dry. In 1910, brewery owners, hop farmers, and liquor dealers fought back with their own initiative to give cities and towns the option to allow alcohol even if it was outlawed at the county level. Oregon voters approved that initiative in the November elections, and rejected two others that would have instated prohibition statewide. Almost half of Polk Counties’ twenty-seven towns chose to go “wet.” Among those that stayed dry were Rickreall, and Monmouth.

In 1914, Oregonians instituted prohibition by passing another initiative that amended the state constitution to outlaw the manufacture, sale or advertisement of alcohol statewide. In 1919, Congress passed the Eighteenth Amendment, outlawing alcohol nationwide. In 1933, alcohol again became legal in Oregon and the nation when both Congress and Oregon voters repealed prohibition laws.

Monmouth, located near Dallas, maintained prohibition from the mid-nineteenth century until 2002, when voters there approved the legalization of beer and wine sales.