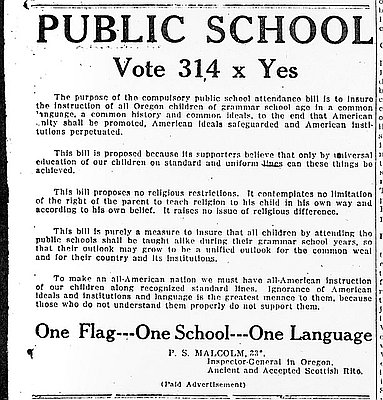 This paid advertisement in support of the Oregon Compulsory Education Bill appeared in many newspapers across the state in the weeks prior to the 1922 general election. The bill, which appeared on the ballot as an initiative, required all parents and guardians in the state to send their children between the ages of eight and sixteen to public school. Members of the Scottish Rite Masonic Order, a national fraternal organization, initiated the measure, although some historians suggest that the bill’s true architect was the Ku Klux Klan, which viewed the initiative as an early step in a national campaign.

One goal of the bill was to eliminate private schools, where, supporters argued, the elite learned to be “snobbish” and where recent immigrants resisted Americanization and created “cults” and “factions.” Oregon was one of the most homogeneous states in the country, and a vote on the measure made it an appealing test case for compulsory public education.

Opponents considered the bill, and this advertisement, to be deceptive. While the advertisement claimed that the bill did not propose restrictions on religion, elsewhere the bill’s proponents openly declared what they saw as the benefits of closing Catholic schools.

The name of the bill and the language used to support it bore a resemblance to—and also distorted—national movements that had established a system of free public education and the states' right to make education compulsory. Attendance at a school selected by parents and guardians had been widely accepted, and the law required children to attend school until the age of fifteen. All schools, public and private, had a legal obligation to meet educational standards determined by public school officials, including instruction in English.

Many agreed with William D. Wheelwright, chair of the Oregon State Child Welfare Commission, when he called the bill insincere. In a state that was overwhelmingly white and Protestant, he maintained that the conditions the bill sought to correct were nonexistent in Oregon. The bill, he claimed, incited citizens to “war against a phantom,” creating bitterness and hostility for no reason.

On November 7, 1922, the measure passed by a 53 percent margin, and it was scheduled to go into effect on September 1, 1926. The Sisters of the Holy Names of Jesus and Mary and the Hill Military Academy challenged the law, however, and the U.S. Supreme Court declared it unconstitutional on June 1, 1925.

In 1923, the Hill Military Academy of Portland filed suit with the U.S. District Court against the State of Oregon to challenge legislation that would have outlawed private school education as students’ primary form of instruction. The courts handled the academy’s case jointly with that of the Society of Sisters …