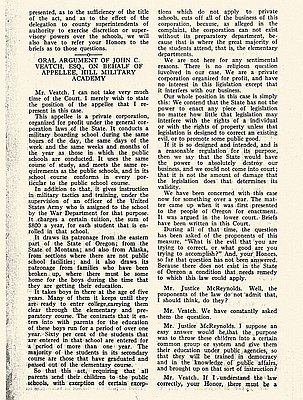 In 1923, the Hill Military Academy of Portland filed suit with the U.S. District Court against the State of Oregon to challenge legislation that would have outlawed private school education as students’ primary form of instruction. The courts handled the academy’s case jointly with that of the Society of Sisters of the Holy Names of Jesus and Mary, which operated several Catholic schools. When the private school won the case, the State of Oregon appealed to the U.S. Supreme Court. The joint case—Pierce v. Society of the Sisters and Pierce v. Hill Military Academy—was argued before the Court on March 16 and 17, 1925. On March 17, attorney John C. Veatch delivered an oral argument to Supreme Court justices in support of the academy. This excerpt from his presentation appeared in a pamphlet that the private school published at the conclusion of the case.

The Oregon Compulsory Education Act originated as a controversial initiative that the state’s voters passed by a 53 percent in 1922. Supporters of the bill, many of whom were members of the Ku Klux Klan and anti-Catholic, called for uniform public schools that would foster patriotism and eliminate elitism. Opponents of the bill distributed literature that asked: “The babe in the arms—the little tot tugging at apron strings—the child ready for school—who will advise taking these away from a mother’s direct control?”

In arguments before the federal courts, Veatch argued that the Hill Military Academy was a business. By drawing away the military academy’s patronage, the compulsory school law interfered with the property rights of the school without proving a clear social benefit.

The courts handled the academy’s case jointly with that of the Society of Sisters of the Holy Names of Jesus and Mary, which operated several Catholic schools. The Society’s attorneys focused on the constitutional rights of parents. The State responded by arguing that it had a right to enact legislation that ensured students received an education that was standard and efficient. “But no one has proved the inefficiency of private schools,” J.P. Kavanaugh argued for the Society of Sisters.

On June 1, 1925, before the law had gone into effect, the U.S. Supreme Court announced its unanimous decision in favor of the private schools. “The child is not a mere creature of the state,” stated Justice James McReynolds, who delivered the opinion. The court also maintained that the law deprived the schools of their property without the due process guaranteed to them by the 14th Amendment.

This paid advertisement in support of the Oregon Compulsory Education Bill appeared in many newspapers across the state in the weeks prior to the 1922 general election. The bill, which appeared on the ballot as an initiative, required all parents and guardians in the state to send their children between …

This ca. 1920 photograph shows students on the campus of the Hill Military Academy in northwest Portland.

Private schools have a long history in Oregon, where religious denominations founded most of the earliest schools. They continued to thrive while the state-funded public school system grew during the late 19th and …