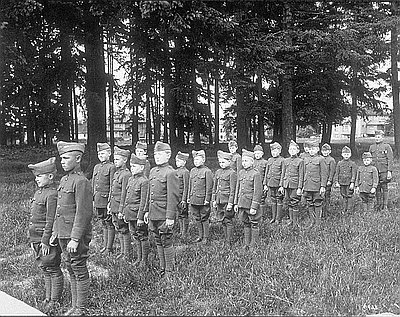 This ca. 1920 photograph shows students on the campus of the Hill Military Academy in northwest Portland.

Private schools have a long history in Oregon, where religious denominations founded most of the earliest schools. They continued to thrive while the state-funded public school system grew during the late 19th and early 20th centuries. Early on, many of the private academies, including the Hill Military Academy, were open only to boys.

In 1901, Joseph Wood Hill founded the Hill Military Academy, modeling it after other military academies around the nation that were popular before and after the turn of the century. He believed that school uniforms, military drills, and discipline taught boys obedience, respect, and self-restraint. Hill, who had previously been the headmaster of the Portland’s Episcopal Bishop Scott Academy, included Christian instruction at his school. Many educators of that era saw no dichotomy between Christian teachings, military-style training, and education.

In 1931, the Hill Military Academy moved from the northwest district to Rocky Butte in eastern Portland. The school closed in the 1950s after years of declining enrollments.

This political cartoon appeared on the front page of the Portland Telegram days before Oregon voters passed the initiative on compulsory public school attendance in the 1922 general election. The cartoonist used the imagery of the melting pot, a device proponents of the bill included in their campaign literature, to …