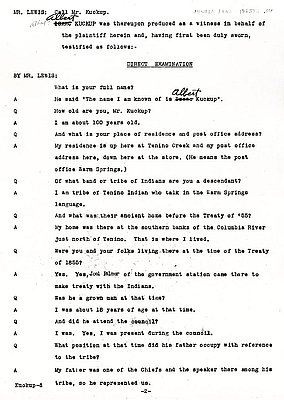 While still a young man, Kuckup attended the 1855 Wasco Council, during which Joel Palmer, superintendent of Indian affairs for Oregon Territory, negotiated a treaty with the tribes of what Palmer called “middle Oregon.” This treaty led to the establishment of the Warm Springs Indian Reservation.

Kuckup notes that the Indians wanted a reservation near the Columbia River, which he refers to as his people’s “mother country.” Palmer refused to entertain the idea of a reservation at The Dalles, however, arguing that the possibility of conflict with whites was too high along the river. He was adamant that the Indians accept a reservation to the south where they were less likely to encounter settlers.

Kuckup goes on to describe the promises Palmer made about fishing, hunting, and gathering rights. Palmer promised the Indians that the fish, game, and plant foods they had always depended on would still be theirs to use. However, Kuckup states that whites soon took control of the forests and tried to exclude the Indians from using the game, berries, and roots there, an assertion echoed by other witnesses later in the hearing.

O’Donnell, Terence. An Arrow in the Earth: General Joel Palmer and the Indians of Oregon. Portland, Oreg., 1991.