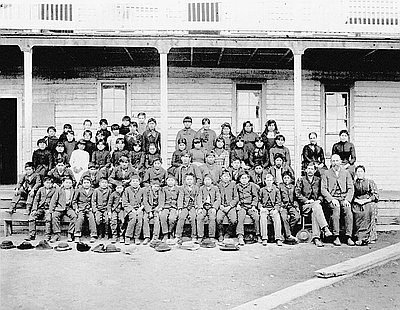 The 1855 Treaty with the Tribes of Middle Oregon stipulated that the U.S. government provide the Warm Springs Reservation with a school house, teacher, and books.  Through the 1860s, educational instruction on the reservation remained modest due, in part, to the limited funds available from the Indian Service for education. Additional contributing factors included the Native resistance to having their children receive non-Native instruction, the need for most families to seasonally leave the reservation to fish and gather food stores, continued reservation raids from Northern Paiute groups, and the recurrence of disease such as measles, dysentery, and influenza, which struck the women and children quite hard.  In addition, children from the northern part of the reservation were rarely able to attend the small, one-room school located at Warms Springs, site of the Indian Agency.

During the latter decades of the nineteenth century, Warms Springs Agency officials slowly expanded educational instruction on the reservation, establishing a day and boarding school at the agency site, as well as a boarding school at Simnasho in the northern part of the reservation.  The Warm Springs schools followed the standard curriculum promoted in reservation and off-reservation Indian school throughout the United States.  This curriculum promoted an assimilationist program aimed at replacing the children’s indigenous culture practices, language, and religious traditions with those of the dominant American society.  Given the traumatic nature of such a process the pupils and their parents responded in varying ways to the educational system on the Warm Springs Reservation.

Some students openly resisted assimilation and the strict discipline common in nineteenth-century schools by running away.  Others practiced modesty because the best students were often removed from their families and taken to off-reservation boarding schools such as the Chemawa Indian School in Salem.  A number of parents remained skeptical, even critical, of the agency schools, and resisted pressures by the various Indian agents to force their children to attend school on a regular basis.  Others wished to have their children educated in both their traditional culture and the dominant white culture.  These parents believed that a bi-cultural educational experience could benefit their children as individuals and also create a new generation of future leaders who would one day ably defend the rights and interests of the Warm Springs tribes.

Photographs like this one of an 1882 group of Spokane Indian children seven months into their residency at the Forest Grove Indian and Industrial Training School were often used as propaganda to raise funds and to demonstrate the effectiveness of the off-reservation boarding school system.

Read full article ›
Treaty with the Tribes of Middle Oregon

In June 1855, Joel Palmer, Oregon Superintendent of Indian Affairs, met at The Dalles with representatives of the various Upper Chinookan and Sahaptin peoples of the mid-Columbia River in order to negotiate a treaty between them and the Unites States. These groups included the Tygh, Wyam, Tenino, and Dock-Spus bands …