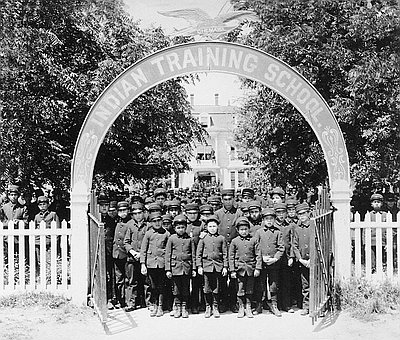 In 1880 the United States government authorized the construction of the Forest Grove Indian Training School in Forest Grove, Oregon.  Due to local hostility, the poor agricultural potential of the school’s land, and the destruction of the girls dormitory by fire, the school was relocated in 1885 to the outskirts of Salem, Oregon and renamed Chemawa Indian Industrial School.  Today, the school—renamed the Chemawa Indian School—is an accredited four year high school and is the oldest, continually operated Indian boarding school in the United States.

Throughout the first decades of its operations, the school was an institution designed for the assimilation of Indian peoples.  By removing children from their families and communities—sometimes by force—and relocating them at the boarding school, administrators hoped to break down tribal identities and allegiances, replace Indian religious and cultural practices and beliefs with Christian teachings, and impose the use of English in lieu of Native languages.

Early administrators ran the school with a militaristic style of order and obedience.  Boys had their hair cut short and were clothed in military-style dress.  Chores, labor, and classes were initiated with bells.  Many rules were even enforced by a hierarchy of ranks that mimicked military discipline.

The early educational curriculum of the school included reading, writing, arithmetic, and religious training.  A heavy emphasis was also placed on vocational training.  Boys were taught to farm and were required to grow food for the school.  They were also relied on as laborers for school construction projects.  Girls were taught the rudiments of housekeeping and sewing, helped maintain the school, and provided the student body with adequate clothing.