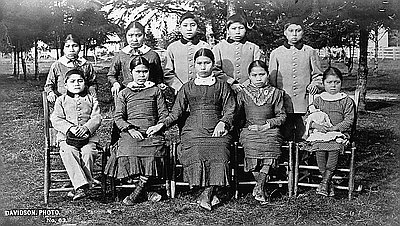 Photographs like this one of an 1882 group of Spokane Indian children seven months into their residency at the Forest Grove Indian and Industrial Training School were often used as propaganda to raise funds and to demonstrate the effectiveness of the off-reservation boarding school system.

By the late 1870s, the U.S. government had turned from a policy of separation to one that focused on assimilating Natives Americans into the mainstream of American society. To accomplish this, schools like the Forest Grove Indian School implemented a rigorous training program that combined an academic education with training in vocational arts for boys and domestic tasks for the girls. The school also stressed farming in order to foster an ownership-attachment to the land and eliminate the seasonal movement integral to some Native American groups. As part of their education and to raise much-needed funds, students were often assigned to work outside the school.

The assimilation process at off-reservation boarding schools bore distinct military hallmarks. All students were subject to a daily routine grounded in forced discipline and strict regimentation. Long hair on boys was cut short and traditional Indian clothing was replaced by military uniforms and dresses. Students were forbidden to speak their native language and from practicing their traditional religion. Assimilation was designed to erase the student’s Indian identity and replace it with one that would allow for a smooth integration into white society. Students were alienated from their families and their traditional culture. The school was purposefully sited at a great distance from the reservations, making it difficult for parental visits and for students to run away. Student mortality rates were high. Of the 321 students enrolled during its five-year existence, forty-three—most of them girls—died while at the school, often from communicable diseases like tuberculosis.

In 1885, five years after it was founded, the Forest Grove Indian School moved to the Salem area where it eventually became the Chemawa Indian School. The students were still subjected to a combined program of academic and vocational training, but, as time passed, the rigorous military nature of the Indian school program was abandoned. Today, goals of assimilation have been replaced by an emphasis on Native American pride and identity. Today, as the Chemawa Indian School approaches its 125th anniversary of operation, it remains the oldest continually operating Indian boarding school in the country.

This group of children from the Spokane tribe was recruited to attend the Forest Grove Indian and Industrial Training School in 1881 as part of the effort to assimilate Native Americans into the dominant U.S. culture. The collapse of Indian resistance to white encroachment in the late 1870s signaled a …