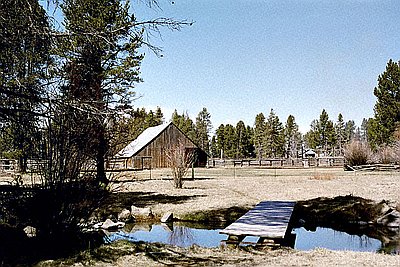 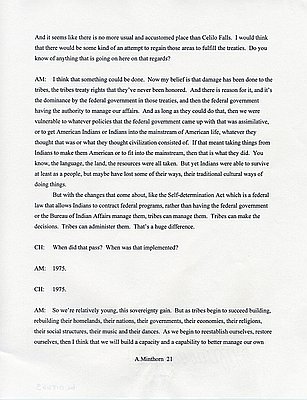 Antone Minthorn (Cayuse) has served as Chairman of the Board of Trustees of the Confederated Tribes of the Umatilla Indian Reservation since 1997 until now (2007). In this 2000 interview, he discussed how tribal members on the Umatilla Indian Reservation have worked to govern and provide for themselves during the past three decades. Minthorn noted the importance of the Indian Self-Determination and Education Assistance act, which Congress passed in 1975.

Self-Determination was one of many legislative attempts throughout history to clarify the relationship between the federal government and sovereign Indian nations. In 1924, for example, the government granted Indians citizenship status and allowed them to vote. Congress passed the Indian Reorganization Act in 1934, under which tribes were encouraged to adopt government structures that mirrored those of the United States. In Oregon, the Confederated Tribes of the Warm Springs Reservation took advantage of this policy, but the Umatilla tribes did not, being wary that adopting American-style governments would further divorce them from traditional forms of governance. Under the IRA, for example, the secretary of the Interior had the ability to veto policies put in place by tribal governments.

In 1970, President Richard Nixon delivered a "Special Message on Indian Affairs," calling for a "new national policy toward the Indian people" that would "assure the Indian that he can assume control of his own life without being separated involuntarily from the tribal group." National movements for African American and women's civil rights also influenced the government's adoption of self-determination policies.

Minthorn credits the Self-Determination Act with giving Indian people the legal ability to regain sovereignty, which he saw as a slow process that is political, economic, and cultural. "As we begin to reestablish ourselves, restore ourselves" Minthorn said, "then I think that we will build a capacity and a capability to better manage our affairs and to deal with the other sovereigns such as the state and the feds."

Between 1906 and 1908, the federal government built the first part of the Umatilla Irrigation Project, a large-scale development to divert water from the Umatilla River to farmers’ fields in northern Umatilla County. A 26-mile-long canal brought the water to the Cold Springs Reservoir, where a series of outlet pipes …