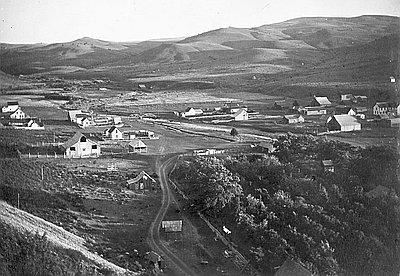 This is a photograph of the central Oregon town of Ashwood at the turn of the twentieth century, before a mining boom spurred an increase in building construction.  Ashwood, located on Trout Creek in eastern Jefferson County, takes its name from the nearby Ash Butte, formed by volcanic ash deposits.

Prior to Euro-American colonization, the Trout Creek region was a borderlands area utilized by two distinct Native groups, the mid-Columbia River Sahaptins and the Northern Paiute.  Following the forced removal of the Columbia River Sahaptins onto the Warms Springs Reservation in the 1850s, and the defeat of Northern Paiute resistance in the 1870s, the Trout Creek region came to the attention of settlers and ranchers.  Impermanence marked these early settlement years due to the difficulty of making a living on the arid landscape. Those who remained on Trout Creek at the end of the nineteenth century migrated to the region to raise cattle and sheep for the growing livestock market.

By 1900, sheep had become the mainstay of the local economy, a result of the national market for wool products and improved transportation links in central Oregon, including the railroad to nearby Shaniko. Ashwood was then a small but permanent community, comprised of several groups: ranching families, sheepmen and their families, and a few subsistence farming families.  However, change soon came to Ashwood in the form of important gold and silver strikes. Local farmers and sheepherders discovered mineral-rich quartz as well as sulphate ores.  During the first decade of the twentieth century, prospectors and mining companies moved into the Trout Creek region seeking to exploit the newly discovered mineral deposits.  Although this dramatic development engendered conflicts over the area’s land and resources, long-time residents sought to take advantage of the economic boom created by the mining industry.

James and Addie Wood platted the town of Ashwood on their property, which straddled both sides of Trout Creek.  Entrepreneurs soon constructed buildings to accommodate a variety of new businesses.  These included a general merchandise store, a saloon, a confectionary, a blacksmith shop, a livery, a lumber mill, a ladies’ millinery, a photography studio, a butcher shop, and a dentist’s office.  Although the economic boom created by the mineral strikes attracted outsiders to the Trout Creek area, the long-time residents of Ashwood and their descendants largely directed and benefited from the growth of the town.  When the mining industry declined after several years, town residents refocused their attention on the long-term strategy of raising livestock and farming.  Agricultural production increased in the twentieth century following the development of irrigation in the region.

In the years following the Civil War, large, open tracts of land became available to Euro Americans as the federal government progressively instituted the long-standing policy of Indian removal, whereby Native groups were …