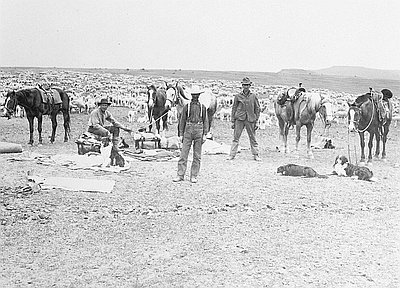 In the years following the Civil War, large, open tracts of land became available to Euro Americans as the federal government progressively instituted the long-standing policy of Indian removal, whereby Native groups were forcibly re-settled onto reservations. As a result, sheep raising on the open range expanded throughout the American West, including Central Oregon. Central Oregon was a choice area for sheep raising. Sheepmen would graze their animals on the slopes of the Cascades and Ochoco Mountains during the spring and summer, moving the bands to the lower elevations during the cold winter months. In addition, the sheep proved particularly adapted to the changing plant life of the Central Oregon range. Sheep preferred the annual non-native “weeds” (or forbs) such as pigweed and quack grass that took root after cattle had grazed on native species such as bunchgrass and giant wild rye.

Routine, isolation, and an attention to detail—especially the health of the sheep—marked the lives of the sheepherders on the open range. Also known as tramp sheepmen, these sheepherders were not always well-liked by either farmers or cattlemen. This stemmed from a general view of sheepherding as a less reputable occupation than farming or stock raising and from growing conflicts over land use and natural resources. Despite these difficulties, young immigrant men, particularly those from countries with sheepherding traditions, sought out these positions, which provided opportunities for economic advancement. Upon receiving their annual pay, sheepherders might purchase their own small flocks in order to become independent operators. Unlike cattle raising, which required a much larger initial investment and much longer period of maturation, sheep could be raised more cheaply on unclaimed range lands. Through the period of the open range, which lasted into the early decades of the twentieth century, sheep operators and their hired sheepherders worked alongside each to ensure the health and welfare of the flocks.

People and animals lined up for a livestock show on the grounds of the Portland Union Stockyards.  The first part of the twentieth century was a busy time at the stockyards.  One of the last livestock commission men recalled in 1967, that in its heyday, from the 1920s through the …