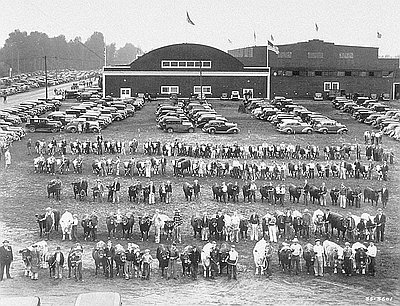 People and animals lined up for a livestock show on the grounds of the Portland Union Stockyards.  The first part of the twentieth century was a busy time at the stockyards.  One of the last livestock commission men recalled in 1967, that in its heyday, from the 1920s through the 1950s, the stockyards was one of the busiest places in Portland, where “you were lucky to find a place to park within half a mile of the pens.”

Most of the stock, cattle, hogs, and sheep, arrived by rail from as far a field as eastern Oregon and southwestern Washington.  Some, however, arrived on foot and occasionally by horse team and wagon that carried stock to Vancouver, Washington, and then on to Portland, via ferry.

The Union Stockyards opened in 1909, and ten years later, large national companies like Union Meat, owned by Swift & Company, proposed to put up half the amount for a new facility to be called the Portland International Livestock Exposition Building.  The other half was to come from local interests.  Several banks, department stores, and lumber, grain, and wholesale houses pledged financial support as did the Daily Oregonian, and Simon Benson.  The stockyards were good business, drawing distant farmers who might then purchase readily available equipment and supplies while they were in town.