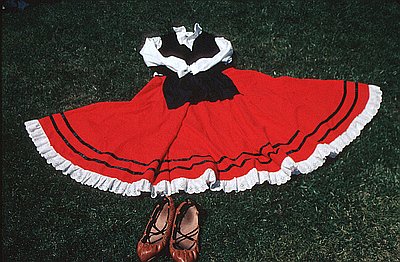 This traditional Basque dress (property of Amparo Hofman’s Dance Troupe) was photographed by Lynn Hadley on July 24, 1998 while she was doing field work for a traveling exhibit project titled Traditional Arts of the Oregon Country (TAOC). The TAOC exhibit was curated by the Oregon Historical Society Folklife Program and traveled throughout Oregon from December 1998 through December 1999, moving monthly among rural libraries.

Although the center of the Northwest Basque population is in Boise, Idaho, a sizeable colony settled in Jordan Valley, Oregon and in communities as far north as the Columbia River Valley. The first Basques in the Northwest highly valued the vast open range east of Oregon’s Steens Mountain because it was ideal for continuing the sheep-herding traditions of their ancestors. By 1945, there were nearly 10,000 Basques in the Northwest.

The first Basques immigrated to the United States in 1850 from northern Spain and South America. Most traveled directly to San Francisco with visions of gold and fortune. Like most immigrant miners, the Basques were turned away by nativist, anti-immigrant exclusion, but they found solitude and economic possibilities in California’s San Joaquin and Sacramento valleys. By the 1880s, they dominated California’s sheep herding industry. With the expansion of the industry, encroachment of cattle ranchers, and completion of the railroad lines, Basques migrated into northeastern Nevada, southwestern Idaho, and southeastern Oregon.

Most Basque immigrants traveled from their homeland in northern Spain to Oregon between 1900 and 1920 and settled in Vale, Ontario, Rome, and Jordan Valley with intentions of staying long enough to earn money to return to Spain and buy a business or farm. Before long, Basque men sent for their wives and children to join them in Oregon. Basque influences can be seen even today in the region’s stone homes and boardinghouses, banks, and Catholic churches. They celebrated their customs at festivals, transplanted traditional foods, and played traditional Basque sports as they grew accustomed to American business practices, fashion, and technology.

Northern Spain and southwest France is the homeland of the Basque people, who have sometimes been …