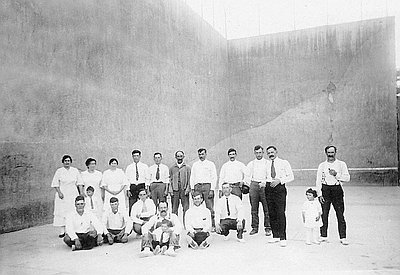 Northern Spain and southwest France is the homeland of the Basque people, who have sometimes been referred to as the “mystery people” of Europe due to the uncertainty surrounding the origin of their distinctive language and cultural traditions. The Basque language, called Euskara, is unique in that it is the only surviving example of a pre-Indo-European language in Europe.

Basques first came to the United States in significant numbers during the California Gold Rush, which began in 1849. The peak of Basque immigration, however, was from the late 1880s to the mid-1920s. Although most were farmers back in Spain, Basques became key players in the American West’s sheep industry. Basque sheepherders would often tend others’ flocks for a season or two, then acquire their own flocks and bring their relatives over from Europe to help tend them.

Basques began migrating to the Pacific Northwest in significant numbers during the late 1880s. Historian Mario Compean notes that “expansion of the sheep and cattle industries coincided with the growth of mining centers, and the Basque herders soon followed the trek of miners from California to northeastern Nevada, southeastern Oregon, and southwestern Idaho.”

Boise, Idaho, was home to the largest Basque community in the Northwest, but southeastern Oregon’s Jordan Valley also hosted a substantial Basque population. According to oral tradition, the first Basques to arrive in Jordan Valley were José Navarro and Antone Azcuenaga, who probably came to Oregon from Nevada around 1889. Many more Basque immigrants would follow. Folklorist Sarah Baker Munro notes that Basques “came in large enough numbers to comprise two-thirds of the population in Jordan Valley.” Most of the Basques who moved to Jordan Valley were from the Spanish province of Bizkaia. Men tended to immigrate first, later sending for their wives and children to join them.

Basque immigrants began building Jordan Valley’s pelota court, or fronton, in 1915, finishing it two years later. Used until the 1930s, it gradually fell into disrepair in the following decades. The Jordan Valley fronton, Oregon’s only pelota court, was added to the National Register of Historic Places in 1972. It underwent a full restoration in 1997 and is today a prominent landmark in the southeastern Oregon community.