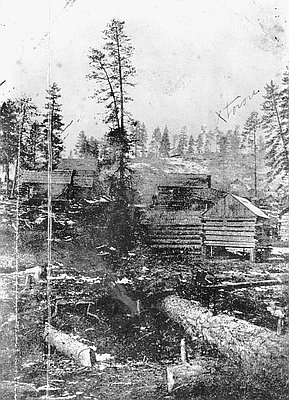 This rare photograph shows part of the mining town of Auburn, located in northeastern Oregon about eight miles southwest of Baker City. The photo is dated 1861, but it is possible that it was taken in 1862 or later, as Auburn only had one or two log buildings until the summer of 1862. Although the townsite stands deserted today, Auburn was once the largest settlement in eastern Oregon. For several years it was the center of a vibrant mining district on the southern edge of the Blue Mountains.

A group of prospectors from the Willamette Valley first discovered gold in the area in October 1861, the first significant strike in eastern Oregon. By the spring of 1862, mining activity in the district had moved a few miles southward to the confluence of the Blue Canyon and Freezeout creeks. The hundreds of miners who had already arrived in the area drew up a set of mining laws in May 1862, defining a claim as 100 feet square and requiring miner to work their claim at least one day in six. They also agreed that “Chinamen shall not be allowed to own mining claims in this district, either by purchase or preemption.”

By the fall of 1862, Auburn had grown into a fully developed town with general stores, saloons, lumber mills, blacksmith shops, butcher shops, hotels, and a school. In September of that year, the state legislature designated Auburn the first county seat of Baker County, which was formed in response to the rapid influx of people into the region. By 1863, the town had grown to an estimated 5,000 to 6,000 people, the great majority of them men, though there were some women. Several women ran boardinghouses and hotels with their husbands, and many individual women made a living by doing laundry, sewing, and cooking for the miners. There were also numerous houses of ill repute.

Auburn disappeared nearly as fast as it was established. By December 1864, the Salem Statesman reported that “the total number of residents would probably not exceed one hundred and fifty.” Most of the miners had moved on to better diggings in Idaho, while many of the settlers had left for Baker City, which became the county seat in 1868. By the 1870s Auburn was largely deserted, though Chinese miners continued to work the tailings left over from the boom of the previous decade.