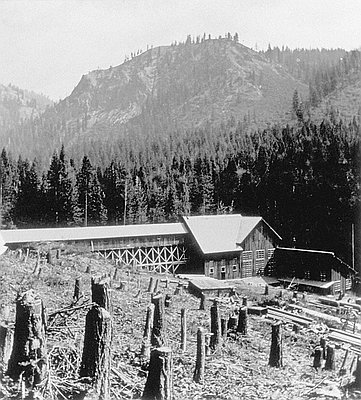 The gold mining district at Cornucopia was in Baker County, some 50 miles east of Baker City in the Wallowa Mountains. Baker County had teemed with miners in the 1860s, and a new series of excitements followed the arrival of the railroad in 1884. The lode mining of the 1880s required drilling and blasting to remove gold-bearing ore, and pulverizing the ore in stamp mills. Steam was used to power compressors for drills and the stamp mills, and the tree stumps are evidence of what fueled the fires of the steam boilers. The Oregon Gold Mining Company in Cornucopia reported a 20-stamp mill in 1889. This was an industrial operation that required substantial buildings and heavy machinery.

The lumber used to build this structure was probably milled in Baker County, and like the machinery, was taken to Cornucopia by horse-drawn wagon. The steeply-pitched roofs helped shed the heavy snowfall found at this 7,000-foot elevation. Mining-related buildings in the vernacular style were common in the gold-bearing areas of Baker, Jackson, Josephine, Lane, and Douglas counties. Other gold mining processes, such as the hydraulic method and dredging, resulted in other kinds of structures and landscape changes, such as dams, ditches, and tailings. Other mining operations, each requiring various structures to extract and process the product, have included coal in Coos County, nickel in Douglas County, copper in Baker County, and iron near Lake Oswego.

The mines at Cornucopia were developed beginning in 1885. Like many gold mining operations, the activity fluctuated widely, influenced by the quality of the ore, operating costs, the national economy, and gold prices. Cornucopia’s most prosperous years came long after the initial discoveries, during the 1920s and 1930s. The post office closed in 1942 after mining ceased.

This photograph shows the flotation mill of the Mother Lode Mine—also known as the Poorman/Balm Creek Mine—located about twenty miles northeast of Baker City. As the name suggests, the Mother Lode Mine was a lode mine, which means that underground shafts were used to follow veins of valuable minerals.