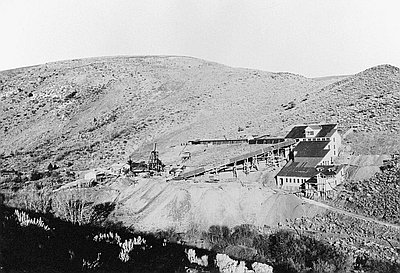 This photograph shows the flotation mill of the Mother Lode Mine—also known as the Poorman/Balm Creek Mine—located about twenty miles northeast of Baker City. As the name suggests, the Mother Lode Mine was a lode mine, which means that underground shafts were used to follow veins of valuable minerals.

Early mining activity in Oregon focused on easily accessible placer deposits, or unconsolidated sand, gravel, and minerals, that were exploited by panning or hydraulic mining. Many of these were quickly exhausted, though, forcing the industry to switch to lode deposits, which required expensive equipment and an organized workforce to mine. The first lode deposits in the state were developed in 1859, when southern Oregon’s Gold Hill Mine began operations. Investors began financing lode mines in northeastern Oregon in the 1860s. By the turn of the century more than half the gold produced in Baker County came from lode mines.

Lode deposits were first discovered in the Balm Creek area in 1907. By 1920, the workings in this area, including the Mother Lode Mine, had produced more than $78,000 worth of gold and silver. In the mid-1920s high-grade copper ores were discovered and developed by the Oregon Copper Company, which consolidated the Mother Lode Mine with several other workings in the area. There were two shafts and three tunnels in operation by the mid-1930s, as well as a 100-ton flotation mill, shown in this photo. Flotation processing uses water mixed with chemicals that react with valuable minerals, making them easier to extract. The tailings, unwanted leftovers, are then dumped into a holding pond.

From 1907 to 1939, the Mother Lode Mine produced more than 8,100 ounces of gold and 4 million pounds of copper, worth approximately $405,000. The mine ceased production in the late 1930s due to falling copper prices and rising operational costs. By the 1990s the mine site had reverted back to federal ownership and was considered abandoned. All claims in the area were declared null and void and managing the hazardous wastes produced by decades of industrial mining became a priority. Recent tests by the U.S. Bureau of Land Management have shown the soil and water in and around the site to be contaminated by mercury, copper, zinc, and other heavy metals. Management of these hazardous wastes is ongoing.