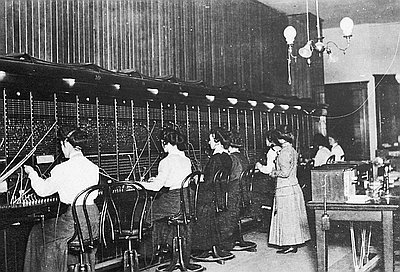 This photograph shows telephone operators at work in Baker City. It was probably taken some time between 1900 and 1915.

Pioneer steamboat captain George Ainsworth brought the first telephone to Oregon in 1878, just two years after Alexander Graham Bell patented the new technology. The first telephone conversation in the state took place in Portland between Ainsworth and his wife on a line that connected his office with his home. In order to popularize the new device, Ainsworth arranged to have another line installed between the printing establishment of George Himes, located on Front and Washington, and Shanahan’s Music Store, located on Morrison Street. The new device became an instant hit; by the fall of 1878 there were nearly a hundred telephones in Portland.

Local telephone exchanges opened in Astoria and Salem in 1884, and in Union in 1885. Pendleton’s telephone system got its start in 1889, and Baker City began developing its system in 1897, when the Canyon City Telephone Company commenced operations. Baker City’s system was locally based at first, but within a few years the town was linked to a regional system that connected the major towns of Grant, Harney, Morrow, and Malheur counties.

As is evident from the photograph reproduced above, Baker City’s telephone company employed women as telephone operators. Known colloquially as “hello girls,” young unmarried white women were hired almost exclusively as telephone operators across the country during the late nineteenth and early twentieth centuries. Women were considered to be naturally more polite than men, and it was thought that their “voice with a smile” would appeal to male telephone users.

Operators not only connected calls, they also served as sources of information. Portland’s Home Telephone Company set up a separate information department in the late 1900s to meet the demand for answers. One “information girl” remarked in a 1912 Oregon Journal interview that “we are prepared to take care of the routine questions, such as baseball scores, the result of prize fights and all similar sporting events. Also to tell what shows are at the theatres, how to get anywhere on the street car, the arrival and departure of the trains, the amount of fare to different places, time of day, how to spell words, the authors of various poems, and all of those ordinary things—that is all part of the day’s work.”

The Portland office of architects Tourtellotte & Hummel, headquartered in Boise, Idaho, prepared this artist’s rendering of the Baker Community Hotel, which opened in 1929. The hotel was located in Baker City; the city was known as Baker from 1911 until 1989. It is reproduced here from a black and …