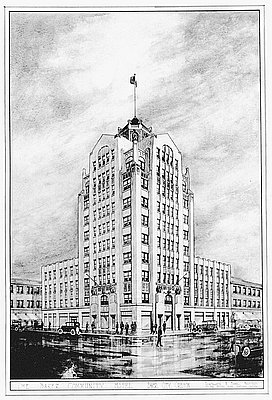 The Portland office of architects Tourtellotte & Hummel, headquartered in Boise, Idaho, prepared this artist’s rendering of the Baker Community Hotel, which opened in 1929. The hotel was located in Baker City; the city was known as Baker from 1911 until 1989. It is reproduced here from a black and white photograph.

The Baker Hotel was one of a number of hotels built throughout the West in the 1920s to serve the new long-distance automobile traveler. It was conceived as a “community hotel,” a modern civic monument that would also provide a financial return to its citizen investors. Unfortunately, with the onset of the Depression, it proved to be a civic and financial white elephant. Today, after several reincarnations, it has been redeveloped as an office building that remains the tallest structure in Baker City and an icon of Art Deco architecture in eastern Oregon.

Oregon hotels in the late nineteenth and early twentieth centuries served several major constituencies, including transient laborers, long-term single residents, traveling sales representatives, and tourists. In railroad-oriented towns such as Baker City, these travelers stayed at hotels that were near the downtown and the railroad station. By the 1920s, the explosive growth in automobile travel also changed their needs. No longer tied to the railroad station, they still wanted to be downtown and handy to their automobiles. The auto-oriented twenties also witnessed the establishment of cabins and motor courts—the precursors of the motel— and publicly-operated auto camps for the economy traveler.

Downtown community hotels were typically executed in a fashionable architectural style, such as the restrained Art Deco design of the Baker. Capital was raised by selling shares at a price affordable to many residents, so that the community itself was financially and emotionally involved in the project’s success. Community hotels often failed to provide parking areas or easy access between automobile and hotel room, design flaws that soon became apparent. Among the community hotels built in Oregon in the 1920s were the Sacajawea in La Grande (demolished in 1970), the Lithia Springs in Ashland (today the Ashland Springs Hotel), and the John Jacob Astor in Astoria (now converted to housing). Tourtellotte and Hummel designed four community hotels in similar styles: the Baker, the John Jacob Astor, the Boise Hotel in Idaho (now offices), and the recently renovated Marcus Whitman Hotel in Walla Walla, Washington.

This photograph shows telephone operators at work in Baker City. It was probably taken some time between 1900 and 1915.