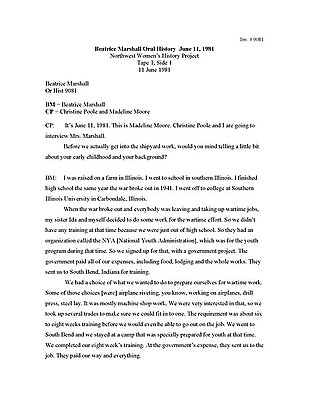 Beatrice Marshall was interviewed by Christine Poole and Madeline Moore as part of the Northwest Women’s History Project.  In this transcribed excerpt of her interview, she recalls her experiences in Portland’s shipbuilding industry during World War II.  An unabridged version of this transcript can be viewed at the Oregon Historical Society’s research library.

After receiving specialized training for war-time industrial labor, Beatrice Marshall and her sister Ida moved to Portland to exploit their new skills in the city’s shipbuilding industry.  Because the war had sapped the nation’s industrial workforce of a large portion of its male workers, industrialists like Henry J. Kaiser, began to hire women in large numbers.  Like many other women, Beatrice and Ida hoped to take advantage of the newfound employment opportunities.  Unfortunately, the two sisters found that the color of their skin precluded them from most job prospects that were available to white women. Regardless of their specialized training, they were confined to jobs that required them to either push a broom, scrub floors, or scrape paint.